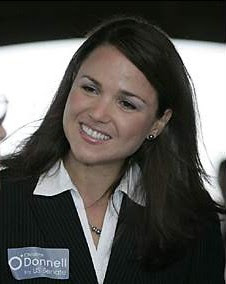 Oh dear! It is the rabbit's unpleasant duty to report that his latest poster girl, Christine O'Donnell is somewhat in the poo. Some unsporting fellow has dug up a VERY OLD CLIP in which the young Christine admits to having - ahem - delved in witchcraft. Does everyone thank Christine for her frankness?

No. They do not. Shocking though it is to relate, people are mocking her! And the Karl Rove fellow, who strikes the rabbit as the kind of self-abuser that Christine quite rightly takes a dim view of, pontificates that 'a lot of churchgoing people' will 'want to know what was all that about'.

Ever available to come to the rescue of a damsel in distress, the rabbit has posted some helpful comments on Team Christine's most excellent website. I copy and paste...

'I see that a lot of people are geting very excited about so-called 'revelations' relating to matters when Christine was much younger and perhaps a little less omniscient than she is now. Christine apparently fessed up to having a date with a witch 'on a satanic altar - and I didn't know it'. Well really! What on earth is the fuss about? The best of us could accidentally - indeed entirely unintentionally - find ourselves on a satanic altar. There is no way any suggestion that Mr Satan was himself present at the time or that any unpleasantness took place. Christine elaborates 'there's a little blood there, and stuff like that'. Well quite so. The blood was probably from one of those chickens that satanists like to sacrifice and therefore no big deal. They use the chicken's entrails to tell the future apparently. Well that's no sillier than the weather forecast, I'm sure all and sundry will agree. I relied on the assurances of the BBC Midlands weather person that it would be dry and sunny only the other day and went out without my umbrella. I got very wet indeed to my considerable annoyance.

So no more of this witchcraft nonsense thank youuuuuu! As the late Frankie Howerd was fond of saying 'titter ye not!' Did you have him in 'Up Pompeii' in the States? You should have done. He was very funny'.

I await any reaction...

I dig on how the Wiccans are now pissed at her too, because she is mis-representing their faith. They celebrate nature, not Satan. No blood sacrifices either.

"The best of us could accidentally - indeed entirely unintentionally - find ourselves on a satanic altar."

i say no. unless you're retarded, then no, one cannot accidently find oneself at a satanic altsr.

and I second Earl there, WICCANS ARE ALL ABOUT THE NATURE LOVE, the celebration of life forces, goddesses, earth, etc. no chicken slayings.

i can't wait for the next installment on the bill maher show, sugar! seriously, a comedy writer couldn't make up half this stuff! *snickering* xoxoxoxox

I'm hoping to still be alive when some former Goth adorned teens with tatts and nipple piercings run for public office and see how that is explained away.

The wine loosens me up also, you know, so that I must limit my consumption to only a few times a year.

All the Wiccans and Pagans I know are better people than the so-called Christians.

Earl/JoJo - I thought the Wiccan/Satanist confusion was odd too. No doubt Christine was young and a tad confused - as opposed to her present exemplary state of lucidity of course.

Savvy/Sybil - I really give up on Team Christine. I know that stereotypically Americans don't get irony but I suspect I'd have a better chance of getting a reaction out of a block of wood! I shall persist a while but they're a tough (ie clueless) audience...

Catchy - 'Drink no longer water, but use a little wine for thy stomach's sake and thine often infirmities'. Christine would like a little scriptural quotation ;)

Mrs Hall - Sorry! Missed you out accidentally at first.

I'm not being serious.

She is seriously whack... here's hoping the state of Delaware agrees!

Daisy - I've been having fun at her expense but I think enough is enough...

What the HELL's wrong with witchcraft?? I am a witch, and I believe I am much more compassionate and loving than most of the people I encounter. (I live in the southern US, aka: "The Bible Belt".) I've never sacrificed anything, except maybe my sanity when I got married.

Also, Witchcraft is completely different from Satanism. The ignorance around this is stunning.

I'm not really writing this for your benefit Rabbit, as I understand your humor... But honestly, I can't help ranting just a tad about social/religious intolerance since it's been brought up.

Little Flower - Christine did get her wrists slapped by the Wiccans for apparently confusing them with Satanists. Just her little mistake...

I once found myself in similar circumstances on a date once. I'm still not sure whether it was an altar. My date was holding a pitchfork though.

SB - Your date sounds like either Satan or an agricultural labourer. It's probably too early to tell which.

Now that Wiccans, Pagans and witches have gone soft, those who like animal sacrifices will be please to learn of the island in the Lake by the Nepalese town of Pokhara where Hindus sacrifice to their hearts' content.