It's a pleasant day in Brum and the Birmingham Back to Backs are having an open day round the corner. Not much summer left, though. The nights are drawing in already. There was a programme on the radio earlier about the Blitz, this being its 70th anniversary. The Blitz - and what people lived through - is worth commemorating. It's hard to put yourself in their place and imagine what our parents and grandparents went through. Things like this, for example.

The first photograph is of course St Paul's which survived more or less intact despite everything about it being devastated. The second photo is Hoiborn Circus. There's something agreeably surreal about the equestrian statue on the right raising his hat to the burning building. A lot of the programme was about the popular music of the time. Tony Benn was on the programme. He was 15 at the time of the Blitz and said his mother liked the song A Nightingale Sang in Berkeley Square. So do I for some odd reason. Here it is. Who else to perform it but Vera Lynn?

Backy the Bactrian Camel (who keeps an eye on the government to save the rabbit the bother) writes: some fellow with the improbable name of Jonathan Djanogly is somewhat in the poo. Djanogly is MP for Huntingdon (as was Cromwell but that's by the way) and something in the sinisterly named Ministry of Justice. It emerges that Djanogly hired a firm of private detectives to conduct an undercover investigation into his aides and colleagues. The subject matter of this investigation: what they thought of him. The answer? They think he is a complete arse. The cost to Djanogly of finding out that people think he is a complete arse: £5,000. Almost makes you sorry for him. Almost but not quite. 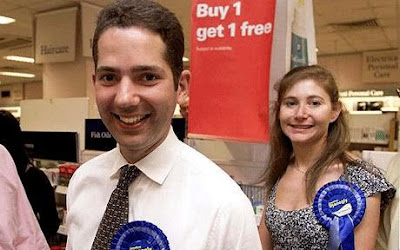 Above is Djanogly with his unfortunate wife Rebecca. Looks like a complete arse too. 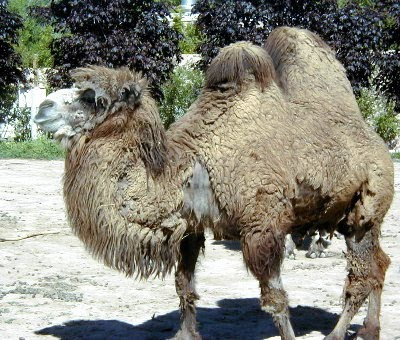 I'm a big fan of 1940's music. "Nightingale" was the favorite song of US talk show host Johnny Carson. He seemed to always get a tear in his eye when it was sung.

How appropo the program on the Blitz was on the radio. The radio was the most improtant news and entertainment source of that period.

As for Mr.Djanogly, did he not know that all bureaucrats are arses? At least he didn't use public funds for the investigation.

You had to say 'blitz' and now i have "Ballroom Blitz" stuck in my head.

Catchy - Ah but Djanogly is also in the frame for claiming £13,000 for his cleaner who was also his au pair on public funds.

I feel your pain.

The Blitz photos are amazing. Haunting, but amazing.

As for Mr. Arse, he probably could've just asked his wife, but she looks like an idiot, too.

I like the statue of the equestrian hat tip also. Eerie.

PF gives a big two thumbs up on the song and the camel too!
Peace rabbit.

Sybil - You're probably right about Mrs Arse, you'd have to be a bit of a numpty to marry him.

Little Flower - Backy is indeed a fine looking animal. Knowledgeable too. His genesis was the first scandal of the present government when the Chief Secretary to the Treasury was outed in a brutal way and obliged to resign after it camne to light that he had been claiming £40,000 in 'rent' paid to his male lover from public funds. I commented at the time that he could be having it off with a bactrian camel for all I cared. And thus a star was born...

How perfect to have Mr (Arse) Djanogly and his wife pictured below the "Buy One Get One Free" signage.

Thanks for the education, and the laugh!