the x-crement factor and don't mess with hippos 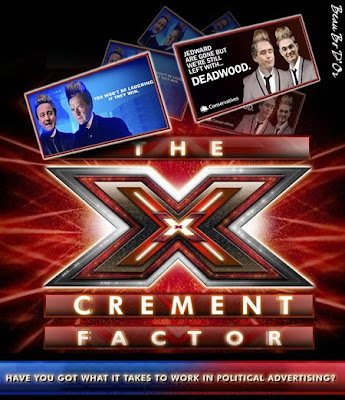 Explanations are in order. The X-Factor is apparently some sort of talent show on ITV. Simon Cowell comes into it, I think. The Su-Bo woman was on it. I'm pleased to say I've never seen it. Current sensations are some twins known collectively as Jedward (a composite name from their names: Edward and something else beginning with 'J'...). Apparently they can't sing and can't dance, which is unfortunate as that is what they do on the programme. Or rather did. They have just been knocked out. They have fair hair that sticks up at the top.

So far so fatuous. But the advertising agencies for both major political parties have got busy and produced posters showing the glorious leader (a man called Brown, I may have to explain for overseas readers) and his Chancellor of the Exchequer and their Conservative counterparts as - erm - Jedward. Beau Bo D'Or (link to left) has got busy on this barrage of dung from the political parties as is to be seen above. Just how stupid do the advertisers who work for the main parties - and by extension the parties themselves - think we are if they imagine anyone is going to be impressed by these barrages of drivel? Below is a CNT/FAI poster from the Spanish Civil War. Now they're what I call a political poster! 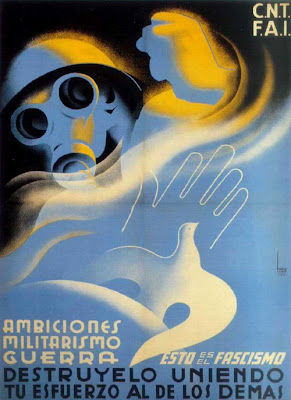 Changing the subject completely, there are some amazing photos of a crocodile meeting its end doing the rounds. They were taken by Czech wildlife photographer Vaclav Silha who had set up his camera when suddenly he struck gold. A crocodile swam too close to a mother hippo and her calves. The hippos formed a protective circle. The crocodile panicked and tried to run over the dense crowd of hippos. No chance! The biter bit. An adult hippo can be seruously aggressive and packs a bite that can - well - destroy a crocodile in very short order. That's exactly what happened. 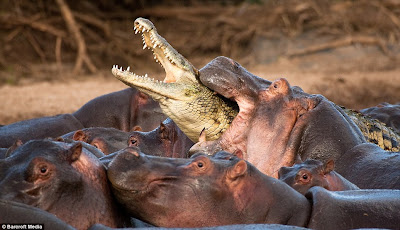 Never under-estimate the power of a mother protecting her young.

That hippo picture would make a great political poster -An angry crowd of citizens devouring a politician in the name of freedom.

Ew. Why do I always come here before I'm about to eat a meal?

With you on the X factor. Never seen it myself, never want to. Gordons a wonderful bloke, shame he cant prime minister as well as he smiles!!!

JoJo - Sorry - I shall be on my best behaviour from now on.

That poster is spooky, even though I don't really get the intricacies of the subject. It scares me.

Poor ole Mr. Crock. His momma should have taught him a little better than to slide up too close to a baby with a momma that weighs in at about a ton!

Catch her.. You're funny!