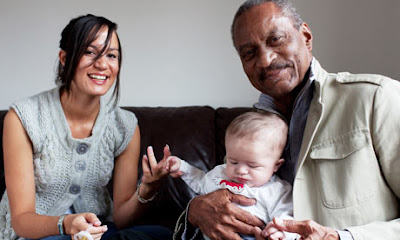 A story in the Guardian Family section yesterday about Johnny Edgecombe and his daughter Melody caught my eye. Way back in the late 80s and early 90s I had a very good friend who befriended Johnny Egdecombe. I met Johnny at my friend's house - he used to babysit the friend's children - and occasionally visited Johnny at his flat together with aforesaid friend. Melody was raised by Johnny after he split up with her mother when she was 14. I remember her as something of a wild child but she seems to have turned out just fine - she is 28 now and has a son called - erm - Johnny. My friend and his family moved out of London and up to Scotland and so I lost the connection with Johnny Edgecombe.
So why is he of any interest? Overseas readers will need an explanation but the answer will be instantly recognisable to any British reader of a certain age - the Profumo affair. He had a former lover called Christine Keeler. She had given him a handgun for protection against another West Indian (a phrase far more commonly used then) hustler called Lucky Gordon. She wouldn't let him in or drop him a pound for his cab fare. Johnny lost it and fired a series of shots at the lock. Johnny was arrested and then out came the major British political scandal of the twentieth century.
John Profumo (the married secretary of state for war - they didn't pussyfoot about with 'defence' as a job description then) and Yevgeny Ivanov (a Russian naval attache and spy) were both sleeping with the same woman as Johnny - Christine Keeler. Profumo lied to the House of Commons and had to go. I say he had to go for lying - which is true as far as it goes - but the sexual scandal was a huge undercurrent and at the time the idea of sleeping with the same woman as a black man was hugely scandalous to most British people. To cut a long story short things got more and more scandalous and more and more dodgy figures appeared in the narrative. It pretty much was the end of the McMillan Government and not so long after the Conservatives (under different leadership) lost the 1964 election to complete the process. A government report was commissioned and presided over by old lizard Lord Denning. When it came out - uniquely among government reports which largely you couldn't give away - people were queueing round the block to buy it.

And Johnny Edgecombe? He got 7 years as regards the firearms episode. That was harsh. He never fired at anyone or endangered life. He was the fall guy, a small time hustler who accidentally sprung open a Pandora's box of establishment scandal. He believes - and I think he is right - that he payed an excessive price for treading on the toes of the establishment. The film Scandal pisses him off bigtime too. He has been portrayed as a violent man - unfairly in my opinion - and it rankles. He was one of that pioneer generation of men from the Caribbean who had it hard - and in particular were shunned by large parts of white society and moved in the circles that accepted them. Many of those circles - jazz musicians and good time girls were somewhat dodgy. More dodgy were the righteous pillars of the establishment who took their illicit pleasures in those circles but maintained a hypocritical respectable front. Not an educated man, he has written reams on the subject of his brush with notoriety. Let's just say it needs a serious sub-editor but there is a tale to be told.

He's 77 now and seems to have achieved some sort of contentment. I had to laugh at the end of the interview where it is revealed that he was off out for the evening - with Howard Marks! I think he has done us all a favour - Johnny, I mean and not Howard Marks - by helping to end the age of deference by showing our supposed betters for what they are. Oh - some of you reading this may fancy yourselves as stoners. No you're not - you're a lightweight. Now Johnny Edgecombe - there was a stoner!

On a different topic, I saw The Men who Stare at Goats last night at the Odeon, Tottenham Court Road. It has its funny moments but in the round, I don't think it works.

Continuing on a 1960s theme - here is the sixth finger part seven (sic) from cult 60s TV show The Outer Limits. Just because.

fascinating story, sugar. i was a kid when it all happened and had no idea of the backstory. xoxo

ps. thanks for the movie tip, i'll wait until it's out on dvd.

Interesting little post that. I haven't heard the term "West Indian" in years.

I was an early teen at the time that story broke, but do remember that it rocked the political world. Later I saw the "Scandal" movie. Thanks for the backstory and your insight of the "justice" rendered to Mr. Edgecombe.

I have yet to meet anyone who enjoyed "The Men who Stare at Goats."

That is one involved story. Sorry the poor guy had to pay for what others wanted to cover up or whatever. That sucks. Here, we have Leonard Peltier, who is STILL in prison for something he did not do. He has Desmond Tutu behind him as well as AI, Robert Redford and a hose of other distinguished supporters, and still, he stays imprisoned. F-- ing politics!

His daughter is beautiful.

That movie name would lead me to believe it was a bore... some movies are meant to be viewed stoned as a bat. Maybe there's the problem?

'some movies are meant to be viewed stoned as a bat'

It should not include 'A Clockwork Orange'

I do have a mental list, which I could write down if you like. I will say that anything made by Chevy Chase or Steve Martin qualify... Also, you can throw David Lynch in there too.

Give it a whirl and get back to me with your observations.
PF