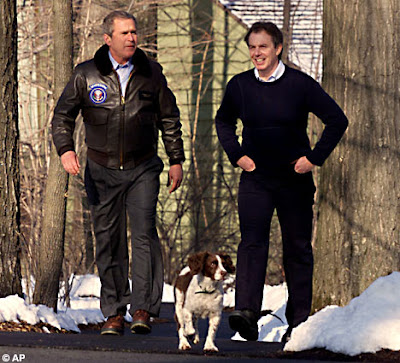 Now - it appears - it's about to come out at the Chilcot Inquiry (for overseas readers, this is the inquiry into the Iraq war. I thought it would be a rubber stamp exercise by a collection of establishment toadies but so far I've been pleasantly surprised). In July 2002, the then Attorney-General Lord Goldsmith wrote to Blair saying in clear and unambiguous terms that war with Iraq would be illegal. This of course is not what Blair wanted to hear and things got nasty. Goldsmith was gagged, told never to put his views in writing again without Blair's permission and excluded from cabinet meetings. Blair did not tell the cabinet of the contents of Goldsmith's letter and a bullying campaign was commenced against Goldsmith who lost three stone (that's 42lbs American readers). Apparently he was persuaded by his wife not to resign.
A question and answer:
Paxman on Newsnight in April 2005 repeatedly asked Blair if he had seen confidential Foreign Office advice that the war would be illegal without specific UN support.

Blair's reply: 'No. I had the Attorney General's advice to guide me.'

Three days before the conflict began, Goldsmith, one may suspect after a good slapping about by Tony's cronies, announced that war would be legal on the basis of previous (and by then rather elderly) UN resolutions on Iraq, despite having explicitly rejected this argument in July 2002.

Both Goldsmith and Blair are to give evidence before Chilcot.

Could be interesting... (the pic above shows Bush and dog - and poodle).

Hat Tip to the ever industrious Mahal.

I have yet to meet a lawyer who thought that the Iraq war was legal and wondered how Goldsmith could have thought otherwise. Now we know that he gave clear advice that it wasn't legal on same basis that any lawyer who knew about international law would have given. Then he was enough of a wimp to allow himself to be bullied into changing his (for want of a better word) mind. If this was the usual stupidity of British establishment politicians (claiming expenses for duck-houses in a moat, porn video rental, etc), it would be of limited importance. It isn't. It was decision to get involved in a war which led to the death of an unknown (but 6-figure) number of people and which was illegal, immoral and contrary to the interests of the most of the people of the attacking countries. Next time some New Labour warmonger speaks of women's rights, why not remind him or her of what Bush and Blair's war has done to the women of Iraq.

Do you mean to tell me that our illustrious leaders have lied, really lide to the people. Next thing, they'll be fiddling their expenses.

Well WR, how to explain to SB that not all us lovely english have the manners of good old Rupie E. Lets see now, who is a good example of bad manners. Russell Brand, Johnathon tongue twister ross, max moseley although he might have said please, Tracy emin, jordan, oooh, kerry katona now there's class, fred the shred and all his money poor love, oh the list goes on and on. Oh nearly forgot, the pinnacle of english manners, Prince Phil no less. Now for manners we look over the pond to the great Paul Newman, Clint, here its james mason, alec guiness, Simon Cowell, the nice one. How about chris ewbank. If there is a youtube clip of him I'll send it to SB, that should finally nail the coffin lid shut.

Friggin liars. At the time we started the quagmire in Iraq, NO ONE would listen to me when I kept asking why, esp. when they had nothing to do w/ 9/11. Now they don't like it when I say, "told ya so."

So now people are jumping on the 'let's bash Obama' bandwagon, as if any of our problems were caused by him!!!

You gave us Hugh Grant, and for that, we repay you with Bush. What a thankless lot of fucktards we are.

SB adores you (and Hugh Grant, of course).

Friggin liars. At the time we started the quagmire in Iraq, NO ONE would listen to me when I kept asking why, esp. when they had nothing to do w/ 9/11. Now they don't like it when I say, "told ya so."

So now people are jumping on the 'let's bash Obama' bandwagon, as if any of our problems were caused by him!!!