The Birmingham Back to Backs... 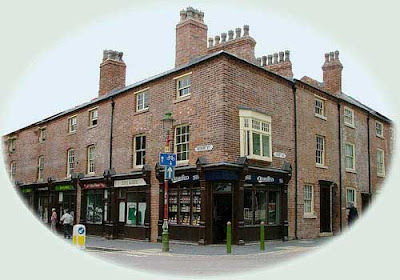 I've been meaning to blog about the Birmingham Back to Backs for ages. As some WR readers know I am now - for the time being and until life takes me, well I don't know where - living in Birmingham. Just round the corner from where I am living are the Birmingham Back to Backs. Back to backs were a type of housing created in the 19th century for the new industrial working class. They were called back to backs because the houses shared a rear wall. They were usually high density and low quality accommodation and were common to pretty much all English industrial cities. They have now all been pulled down under slum clearance schemes and the occupiers dispersed to various new estates. As recently as the 1960s Birmingham had many remaining back to backs. 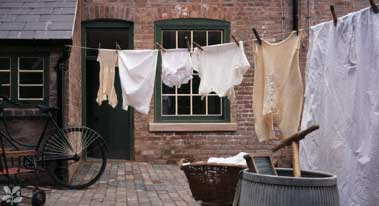 Now they have all gone except one courtyard on the corner of Inge Street and Hurst Street which has been saved and preserved by the National Trust - the Back to Backs are now Grade II listed buildings. I pass them just about every day and it is fascinating. It's like having a time capsule on your doorstep. I've been around them on an open day. The courtyard has a wash house and outdoor toilets of - ahem - a very basic looking type. I was surprised to discover that these -erm - facilities were installed as recently as the 1930s. On the corner is an old fashioned sweet shop selling old fashioned goodies such as rhubarb and custard and sherbert fountains. 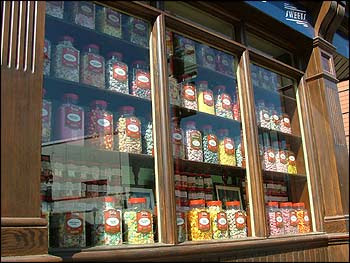 The National Trust has done its research and has discovered something of the history of the former occupiers of the houses and have restored the interiors in accordance with the period. The houses are laid out in various period styles from the 1820s to the 1970s. What struck me was how claustriophobic they must have been to live in with tiny rooms, narrow stairs and the enclosed courtyard. There were also shops along one side. George Saunders, a tailor from St Kitts, ran a tailors shop (it's on the left in the top pic) until as recently as 2001 when he retired. Here he is. 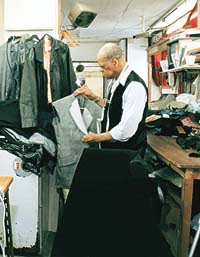 I love the Back to Backs to bits. It's a privilege to live by this time capsule. I discover they're even on YouTube. You can book rooms in them for overnight accommodation! Have a look at the clip. It's worth the annoying commentary.

Oh, and on a completely different topic and with Hat Tip to Mahal for drawing it to my attention, go to YouTube and search for 'Putin being criticised by journalist'. Trust me, it's worth the effort. Annoyingly, embedding has been disabled or I'd put it up here. As my informant comments 'and that man is in charge of the world's second largest nuclear arsenal'.
Posted by white rabbit at 17:09

oh i remember you showin me pics when you first moved there. wouldnt mind visitng the sweet shop with twety pence clutched in my hands

I love Putin's sense of humour.

They still have back-to-backs in Hebden Bridge ! (e.g. Sackville Street).I rented one in the 1980s.Yes, they are quite wee!

I was brought up in the schemes similar to these pal. Great memories.

Wow! Reminds me of scenes from the original Willy Wonka. Especially the candy shop~ beautiful!

I have no comment on Putin deal. Just can't let myself go there now. sigh.
pf

Cool history lesson! One of my fave rave bands, ELO, is from Birmingham. Is there still a neighborhood called Shard End?

Putin's sense of humour reminds me of Ronald Reagan's side-splitting "My fellow Americans, I'm pleased to tell you today that I've signed legislation that will outlaw Russia forever - we begin bombing in five minutes" and B Liar's hilarious joke about Iraq having weapons of mass destruction. Why do countries end up being led by people like Reagan, Bush, Blair, Putin and Berlusconi?