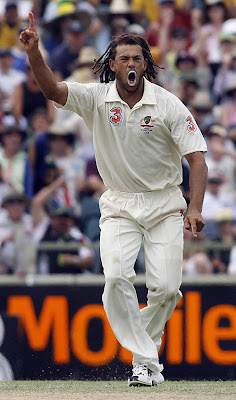 Readers indifferent or hostile to cricket - or indeed sport generally - bear with me! This posting is only about cricket by way of background. Okay - let's get the background stuff out of the way. There is a 5 Test Series being played between Australia and India (international games - and yes American readers - the games can go five days without a result, except Australia play a highly aggressive turbo charged game meaning that their opponents have usually been steamrollered into submission well before the fifth day). Annoyingly, Australia are the best team in international cricket by a country mile. India are pretty good and the financial powerhouse of international cricket commanding dizzying sums as regards sponsorship TV rights etc and aren't afraid to use their financial clout to try and boss events. Rivalry is intense. End of background stuff.
Australia won the first two Tests. The atmosphere between the two teams was poisonous. Matters came to a head when Youvraj Singh, one of the Indian players, called Andrew Symonds (pictured - the only non-white member of the Australian team) a 'monkey'.
Uproar!
The matter was reported to the match referee who suspended Singh for three games. The outraged Indian team threatened to literally take their bats home and walk out of the remainder of the tour. Singh was unsuspended.
Now there is a history here. The Australians are past masters of the art of 'sledging' - verbal abuse of opponents on the field of play. The objective is intimidation and/or distraction of the opposing players and takes the form of insults as regards the opposing player's appearance, alleged personal habits, abilities (or lack of them), claims of a sexual nature as regards the player's wife and - yes - racial abuse. Australian Darren Lehmann got away with calling a Sri Lankan player (and this has never been disputed) a black word we don't use in polite society. Mark Ramprakash (mixed English/Guyanese background) said that the only time he had been seriously racially abused on the field of play was against Australia. This surly crew are somewhat bemused to discover that - while admired for their abilities - they are unloved by even half the population of Australia. It is against this background that Singh opened his mouth and - in mitigation of him - although to the Western mind to call a black man a 'monkey' is beyond outrageous - I strongly suspect he hadn't a clue what buttons he was pushing.
What happened next?
Well the Third Test was played in Perth. Everyone was on their best behaviour and having won their last 16 games on the reel....
AUSTRALIA LOST!!!
Ha! Ha! Ha!
The rest of the cricketing world was rolling on the floor laughing.
A modest proposal and a parting shot...
The modest proposal: why not ban sledging?
The parting shot: Australian Glenn McGrath was annoyed at his inability to get Zimbabwean number 11 Eddo Brandes out and asked (hardly an incisive or witty sledge) "Why are you so fat?"
To which Brandes replied "Because every time I make love to your wife, she gives me a biscuit."
The biter bit...
Posted by white rabbit at 17:25

Cricket is one of my passions. Amusing sledging is... amusing.

But the Aussies went too far. Interetsingly, the Aus press was none too impressed with their own team.


Cricket is one of the great pleasures in life - jelly beans on the wicket etc... do not do it for me

I am a lover of baseball which, as I understand it, originally derived from cricket. That said, I'm really not sure how the two sports differ.

In any event, the insult delivered by the Australian player was indeed unbelievably outrageous. Sounds as if poetic justice was served in the end.

ferryman qc - the jellybeans incident was completely bizarre (India again!)and why it wasn't simply treated as childish and briskly moved on from remains a mystery. It seems that body mass comments can be a great cause of offence on the sub-continent. Remember Inzaman having to be restrained from charging into the crowd and attacking a spectator with his bat after the spectator called him 'aloo' (potato - as in aloo gobi)?

Matthew - ah! Americans and cricket - long story. Evidently a long time ago there was a lot of it about. George Washington and John Adams were both cricket nuts and the first international cricket match ever wasn't between any of the usual suspects but between USA and Canada (1844). Why it declined is not entirely clear but theories even blame the American Civil War (killed off the cricketers) and aggressive expansionism by baseball. Also the USA was not allowed membership of the Imperial Cricket Conference as it had cheekily cancelled its membership of the British Empire in 1776 ;-), which didn't help either.
And the present? Well, un-noticed by mainstream America, it is expanding very briskly in the USA. The reason: immigration from the Indian sub-continent and Englishh speaking Caribbean. The game is very badly managed because, rather like soccer in Australia some years ago, the immigrants from the various countries form blocs and fall out with each other and the International Cricket Conerence has to intervene regularly to clear up the mess. Oh - and a few years ago the USA qualified fr a major international competition by a statistical freak. Guess who they got to play? Yup - Australia! Result: total carnage and the Australians complaining in typically graceless manner about having to bother to play these no-hopers.
End of long disquisition. Parting shot - the USA has produced one top class cricketer - meet Bart King - http://en.wikipedia.org/wiki/Bart_King

Actually it was Harbhajan Singh who delivered the racial slur, not Yuvraj. And after the same racial taunts were delivered to Symonds by the Indian crowd during the entire Indian tour, I'm sure Singh was well aware of what an insult it was. And from all the accounts I've read, Lehmann was (rightfully) suspended when he was found guilty of a racial slur. Just a few facts for you to take into consideration :)

Interesting that charon qc says 'the Aussies went too far'. Went too far in what? In reporting the slur to the umpire as they were told to do? The entire incident was blown entirely out of proportion and I suspect those of you overseas only heard one side of the story. Say what you want about Australia, but I have never seen them spit at other players or disrespect umpires the way I've seen the Indians do in the last couple of tests.

And yes, I'm Australian. And one who is perfectly willing to admit when my team has gone too far, which I don't think they have on this occasion (certainly no more than India!).

Doublwooops: Yes, Lehmann was suspended for 5 one dayers

Memo to self: fact check the half remembered

Apparently there was a cricket match being held in LA between Australia and the US as part of Australia's 'G'day USA' tourism campaign. There were supposed to be some celebrities involved, but I'm not sure what the result was.

It would be great to see cricket become more popular in the US (again) and other countries. It's such a great game! I think the next Ashes series will be very interesting now that Australia no longer has the likes of McGrath, Warne and Gilchrist - I think the reign is ending, which will make for much more interesting cricket in future!

I have to say it makes sense...

..oh and 'ml' missing from end of link for some reason...