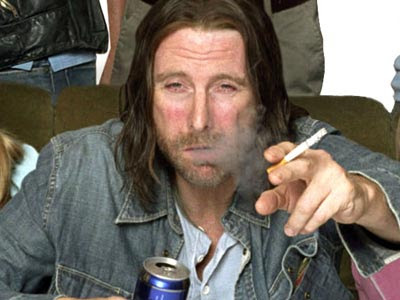 I'm not going to be much of a critic as regards Shameless as being a critic involves - well - criticising. All I really have to say is that - in its fifth series when comedies/dramas tend to flag - Shameless is still compulsory and compulsive viewing. In Frank Gallagher (pictured - perhaps I should add for overseas readers) one of the great comic monsters of all time has been created.
For the uninitiated, Shameless is set in a council estate in Manchester and centres around the Gallagher family. The early scripts were written by Paul Abbott, who drew on his own childhood in the same part of the world, the ninth of ten children. His mother left the family when he was nine, to be followed by his alcoholic father two years later, the children being left to fend for themselves, with the eldest daughter taking over the maternal role. The domestic life of the Gallaghers - and indeed their neighbours - is like entering a kind of demented hyper-reality where none of the usual rules apply and the world is inhabited by a collection of grotesques, monsters and inadequates.
It is also convulsively funny, wonderfully scripted and acted. It can even be moving. There is something touching in particular in the character of Debbie, the young daughter who despite her youth is the mother, not only to her older siblings but also to her drunken, drugged and generally demented father, an oasis of embattled sanity in a sea of lunacy.
The ironic social commentary has spread to the Shameless website, I notice, with features such as 'win a chav-tastic T-shirt' and a 'win a year's dole money' competition. I have entered the latter. A year's dole money would come in very handily down the rabbit hole!
Posted by white rabbit at 20:48

I adore this show! It's by far the best thing that has been on TV in recent years. The actors are just wonderful and the show is very funny. It's a shame that it's relegated to the least-watched channel over here so not too many people know about it.

Have you seen the new show by the same creators, which is called Skins? I've only seen a couple of episodes so far - it looks good but I don't think anything could ever match up to Shameless.

I'm a quite shameless Shameless fan, too.