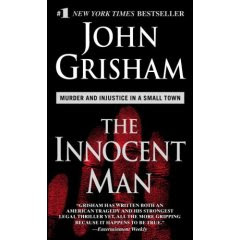 It is only a few years ago that I first read anything by John Grisham, having for some time been vaguely aware of him but leaving him sniffily unread. I bought a double volume edition of The Rainmaker and The Chamber for, I think, the princely sum of 30p from the second hand book stall at a local fete. I read and enjoyed both as light reading - though the end of The Chamber was and was always going to be a cop-out and the studied neutrality on the death penalty grated. He was obviously going out of the way not to antagonise either section of his US readership. Okay, I thought, this guy has one plot - struggling young lawyer stumbles across amazing case - but he does his one plot well enough. I later bought (at full price) The Broker. I then discovered that Grisham had more than one plot but rather wished he didn't.


There matters rested as regards Grisham until the other week when I found myself at Isleworth Crown Court - yes there again! I was told my case was listed for 10.15am. On arrival, I discover that I was last on at 2pm. Not best pleased, I decided that an extensive walk around Houslow in pursuit of a bookshop was in order. The extensive walk tended to suggest that the population of Hounslow are not avid readers but I eventually found a sizeable WH Smith. Rejecting the delights of My Booky Wook, assorted celebrity cookbooks and guff from Jeremy Clarkson, I eventually settled - almost by process of elimination - on The Innocent Man.

I rather suspect that John Grisham doesn't need any bigging up by me but I'm going to recommend The Innocent Man - his first work of non-fiction - anyway. It is an account of how two men, Ron Williamson and Dennis Fritz were tried, wrongfully convicted and sentenced to death for a particularly brutal rape and murder in Ada, Oklahoma. After years on death row, they were finally exonerated and freed. The focus is on Williamson (note the singular in the title) as Grisham obviously worked out that he was the more interesting character for his purposes. Williamson was a former baseball might have been (Grisham is a baseball nut) who deteriorated into alcoholism, drug addiction and schizophrenia. Experience tells that being odd is a dangerous characteristic for a defendant in a criminal trial, especially in an emotive one. By the time Williamson was brought to trial he was not merely odd but floridly mentally ill. The tale is genuinely shocking: the stupidity, loutishness and dishonesty of the investigating police. A prosecutor vindictive and delusive in equal measure. The hopeless nature of the 'evidence' (any properly conducted trial would have been stopped at the end of the prosecution case). The unfairness of the Judge (to put it mildly). The incompetence of the defence lawyer. The brutality of the prison system in general and death row in particular. I won't give away any more. Go read...

A couple of random comments: firstly, sometimes Grisham's breathless purple prose can irritate. Describing a relative's visit to death row, he writes 'moving through the layers of the Big House was like sinking into the dark belly of a beast'. Erm, right...

Secondly, occasionally (sadly not often) a client gives an answer in cross-examination that has you thinking 'oh you beauty!' There is such an answer in Williamson's trial. I quote..

'Isn't it a fact, Mr Williamson, that you and Dennis Fritz are about the only friends each of you got; isn't that right?'

'Well, let's put it like this. You framed him and now you're trying to frame me'.

... I can't honestly say I've ever had too much time for Grisham- he is, as you say, a bit formulaeic; I did try reading Turow's '1L' as a law student, but it was so badly written and sooooo completely depressing ,I rapidly came to the conclusion that American Lawyers aren't worth the paper they're printed on.....

I too have found some difficulty in relating to Grisham's writing in the past. Coincidentally, I recently decided to try him again when I stumbled upon one of his novels that I hadn't read previously. I'm currently reading it: "The Client." It is O.K., but it is definitely not going to become a new favorite. Although the plot is somewhat interesting, I find some of the dialogue to be a bit stilted and contrived. Some of the characters do not quite seem genuine.

Thanks for your review of "The Innocent Man." Upon your recommendation, I'll have to check it out.