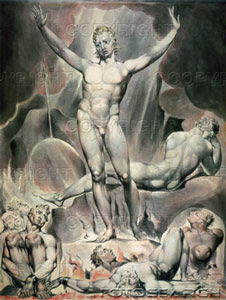 The picture is Blake's 'Satan arousing the fallen angels'. I post it for no particular reason apart from liking Blake and idly wondering what Satan was getting them up to do. Nothing good I'm sure. No doubt the fallen angels included sloth among their vices and getting them out and about doing evil would appear to have been a bit of a chore for Satan.
It is a little odd that Blake. who was entirely capable of producing hideous and surreal images (see his 'Ghost of a Flea') portrays Satan with a normal young man's face and an athletic body rather than as some grotesque, but no doubt our man had his reasons.
Otherwise, I am away for a few days so no further postings for now. I will resume with an attempt to give the benefit of my experiences with literary agents. This may take more than one posting and actually be of some use to one or two of you.
A parting shot. A quote I came across today from Tallulah Bankhead to Somerset Maugham after he rejected her for a part in a play: 'Mr Maugham, I have two words left to say to you, and the second one is "off"'.
A parting parting shot: avoid people with dogs called 'Satan'.
Posted by white rabbit at 11:13