Middlesex Guildhall and other Crown Courts... 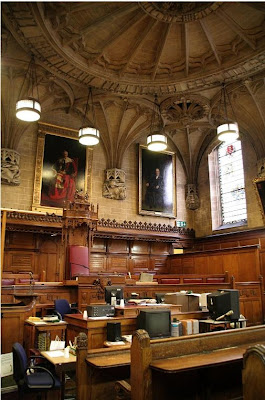 When I started this blog, I resolved to keep legal and political topics to a minimum, however a visit to Isleworth Crown Court today started a train of thought. Isleworth Crown Court has two defects: it is a dump (a former mental hospital as is evident by the central corridor running its length) and it is not terribly accessible from anywhere sensible. It is to be pulled down and a new court to be built in its place (annoyingly still in Isleworth). The reason for the new and much larger court is that Middlesex Guildhall Crown Court has been closed down so that the building can be used as the new Supreme Court building. I have mixed feelings about this. In principle, I am in favour of a Supreme Court as opposed to the present arrangement, namely that the highest court in the land is the Judicial Committee of the House of Lords on seperation of power grounds. Oh - plus an intense dislike for the idea of a House of Lords. Say what you will about the French - but they had the right idea as regards aristocrats! Yes I know that the old style aristocrats (beneficiaries of a female ancestor being on the receiving end of a fast and filthy seeing-to by Charles II etc) have been replaced by the new (tedious placemen and women largely, many of whom - wholly coincidentally of course - have given or 'lent' money to political parties) but there is nothing to be said for patronage - in either form - the new as well as the old.
And therefore what? Well - I regret the disappearance of one of the more attractive Crown Courts. There are few attractive Crown Courts. Of the older ones for example, York and Exeter are nice, Aylesbury isn't. Then there the modern horrors - Southwark and Leeds - again by way of example. Then there are the most recent: breeze block legoland monuments to naff, functional but dispiriting.
Middlesex Guildhall was run down but had a certain charm. It was also very convenient. It had seven or eight courtrooms - the memory fades - and most of the courtrooms weren't much cop. Oh but courts 1 and 2! Above is a picture of court 2. Court 1 was even prettier. They were, like most old courtrooms, damn uncomfortable to work in, but they were so pretty. Court 1 also had a list of resident Judges of the Court. The first was Judge Jeffries - he of bloody assizes fame. Apparently in the mid years of the seventeenth century, he earned £10,000 a year at the bar. So not much change there... He eventually became James II's Lord Chancellor and presided over the bloody assizes after the Monmouth rebellion - a notorious example of judicial over enthusiasm (casualties about 350 by way of assorted gross forms of execution out of about 2,000 dealt with). After his patron fled, Jeffries was incarcerated in the Tower where he died of liver disease - he was apparently a notorious piss artist. It always amused me to see his name on the wooden panel. The second and third resident Judges were brothers Henry (writer) and John (blind) Fielding (do keep up at the back).
Middlesex Guildhall is a listed building and is to be refurbished in a way that has caused howls of horror from traditionalists. I don't really have a problem with this generally - the place did look pretty tired and the refurbishment plans actually look pretty good, albeit ones that I can't imagine they would ever get past English Heritage in any other context. Okay, it's staggeringly expensive also but after the Millennium Dome we are probably inured to that sort of stuff. Governments are for wasting money. My gripe is - they are mucking about with courts 1 and 2!!! This should never be allowed to happen....
Next thing you know - they will take Judge Jeffries' name down!
Okay, having done law - sort of - I'll do a little politics. A quote from Malcolm McLaren I came across recently - Tony Blair was our first karaoke Prime Minister, miming the words of others and not taking any responsibility from the moment the performance ends.
Posted by white rabbit at 19:02

Hi Andrew. I'm wondering: Do you agree with that assessment of Tony Blair? What is the general feeling about him in your circles? I'm not trying to nose into your political opinions, but was wondering how the former Prime Minister is generally perceived there now.

I find it impossible to describe the man in moderate language. Words and phrases such as 'vacuity', 'narcissist' and 'war criminal' spring to mind.

Blair is like Thatcher and Gorbachev before him in being highly regarded abroad but cordially loathed in their own countries. I would say that the general consensus on Blair here is unalloyed contempt.

I had promised myself noty to do politics much in this blog but you have pushed the right button for an intemperate rant! ;-)

Thanks for sharing your view, Andrew. Very interesting. To me, Blair has always seemed to be a unique and complex character. He was generally regarded as a friend to the United States, and used to be wildly popular here. The ongoing debacle in the Middle East has changed many views though, I think.