Blakey has been located and is working for First Great Western 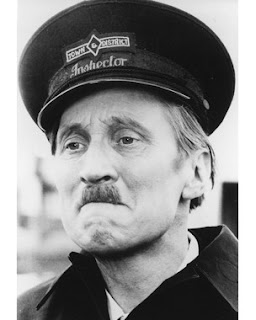 As an unenthusiastic driver, I spend a lot of time on trains. The last serious week's work before Christmas was in Oxford and I commuted from Paddington on First Great Western trains. As I sat slumped in my seat and staring glassily at a lever arch file of papers, I became aware of the ticket inspector (actually, I don't think they are called ticket inspectors any more but 'revenue protection officers', a particularly crass piece of rebranding).
This particular - ahem - revenue protection officer, it quickly became clear, was the reincarnation of Blakey from 'On the Buses'. For the benefit of younger readers, 'On the Buses' was a particularly inane 1970s TV sitcom. I duly produced my ticket to his satisfaction and Blakey shuffled off to a young woman sitting in the seat in front of me.
The young woman produced her purse and asked for a return ticket to wherever it was she was going. She hadn't bought one. The frisson of excitement passing through Blakey's jobsworth frame was palpable.
'That will be an £80 penalty fare to the next stop, which is Reading, plus a fare for the rest of your journey...'
He was in jobsworth paradise.
The young woman said that the ticket machine she was queuing at hadn't worked and she ran out of time.
'There are other ticket machines' Blakey exclaimed, warming to his theme.
Now I don't know why. Maybe she hadn't the money or did but could scarcely afford the penalty fare or was just having a bad day, but the young woman became very upset.
I said to Blakey. 'Don't you have any discretion? You can see she's upset and she obviously wasn't trying to cheat the system'.
Apparently not.
By this point the woman was in tears. Blakey just kept badgering her for ID.
'You can't feel good about this. Or perhaps you do?' I asked, wondering if Blakey got his rocks off bullying young women.
Of course the reply was to the effect that he was only doing his job.
Then someone else joined in telling the young woman what she should do and adding that he was a lawyer. I chipped in that I was too. At this point Blakey was feeling somewhat ganged up on but the train arrived at Reading and the woman got off, still distressed. She gave me a pat on the shoulder as she went in recognition of support. Of course, I don't know what happened then but hope she found someone with an elementary sense of decency to deal with.
The whole thing left a sour taste in the mouth.
Funnily enough, on the train back from Oxford on the same day the revenue protection officer (not Blakey!) found that a woman had the wrong ticket.
'I'll let it go this once', he announced cheerily and pottered off down the compartment.
'Good Lord', I thought. 'A human being'.
Posted by white rabbit at 14:17

Wow. Some people take their jobs too seriously.

That's just crappy, especially given that First Great Western is probably just about the worst train operator in the south of England... AD :-)

I'm not sure Great Western Railway can claim the worst train operator title while tiresome twerp 'Sir' Richard Branson's Virgin trains continue to run (or not).

I recently discovered that to get an early motning train to Birmingham New Street on Virgin costs £123 but the Chiltern Line to Birmingham Snow Hill (actually nearer the Crown Court) costs £29.50. The journey takes longer but when dropping almost £100 less (plus the journey is pretty and the trains less crowded) who cares?

Give a person a little peaked cap and a badge sporting the epithet "Hitler" and he duly turns into one.