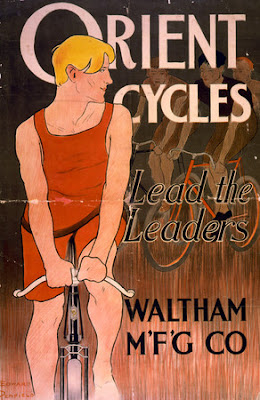 I have to confess that a very bad thought lurks within my breast. I know I shouldn't but I do.
I CAN'T STAND CYCLISTS!
Yes I know! Cycling is very good exercise. Cycling is very ecologically sound. Cycling is a means of mobility for those of limited means. No doubt the list of benefits of cycling continues on and on.
I STILL CAN'T STAND CYCLISTS!
Now a little confessional stuff. I have never been a cyclist and never will be. When I was about 7, the 7 year old next door but one had a terminal argument with a Leeds City Transport bus on a bike. My parents reacted - possibly wrongly but undoubtedly understandably - that I would not have a bicycle. I never did. I have (very occasionally) ridden a bike of course but always under some form of coercion. I hated the experience every time. Therefore my starting point must be a confession of lack of empathy due to not really having shared the experience.
So what is my problem with cyclists? Observation shows that there are broadly two categories of cyclist. The first is the feral youth on a bicycle. These are distinguished by dark clothing, no helmets and as a matter of deeply held conviction, no lights at night. On the off-chance that any feral youths are reading this, do you know what a danger you are? Principally to yourself? I can only assume that they have no insight into how easy it is for a driver to fail to pick them up at night or for some bizarre reason don't care. Potential result - SPLAT! The feral youths also lay themselves open to the police doing to them what the police do best, namely harass adolescent males to overwhelmingly no good purpose, in the unshakeable belief that the feral youth is in dark clothing and without lights so that they may snatch pedestrians' mobiles/bags/whatever is snatchable. In the overwhelming majority of cases feral youths cycle about in dark clothing and with no lights because they are dumb like that and for no other reason but in police eyes they 'fit the profile' and once a profile gets into the police mind, there is no getting rid of it.
On balance, I prefer the feral youths to the second category of cyclist: the neek. For those not in the know, neek is adolescent slang and my theory as to its derivation is that it is a conflation of 'nerd' and 'geek'. Unlike the feral youth, the neek is ostentatiously visible, being festooned with flashing lights attached to front and end of the bike and various parts of their dayglo clad anatomy. The neek invariably wears a helmet, often with a flashing attachment. The neek in cycling mode screams 'look at me! I'm here and don't you forget it!'
At least the feral youth does not share the neek's overweening sense of self-righteousness but the two disparate tribes of cyclists do have two things in common. Firstly, they have an unshakeable belief that red lights do not apply to them. Quite apart from being an irritant per se, this constitutes a regular hazard to pedestrians (speaking as someone who walks far more than he drives). The second common factor is that both groups share another unshakeable belief, namely the belief that they own everything: roads, pavements, footpaths. A few years ago, I was jogging slowly and sedately round the local common. I ran down a dirt track and turned at no great speed to my left past a shed (obscuring my view) onto a footpath (note the 'foot' bit). This caused a cyclist (neek variant) who was booting it down the footpath to complain that he had to take evasive action. He then cycled onto the grass following me and bleating his complaint. I pointed out that he had been on a footpath and not a cycle track and uttered an invitation not unconnected with sex and travel.
Which, being a neek, he did.
Posted by white rabbit at 14:58

I was run over by a bloody cyclist once.

Around here the major variants are:
- bike kids: usually in their late teens through late 20s. They usually have ties to the hardcore punk scene, so they tend to dress in hoodies and dark cargo pants, but they like to build their own bikes (including more odd ones like tall bikes or three wheelers with various baskets) and are sticklers for lights so they don't get hit.
- serious cyclists: spandex cycling clothes, neon helmets, and skinny tires. I almost never see them riding at night anyway, but I'm sure they're good for lights. They like to talk about their ride's specs.
- local commuters/college kids: they're just trying to get where they're going, you know? They tend to be the most likely to try and race that red light.

But riders down here are fairly likely to get hit by a car at some point, so they're all fairly careful. I only find them annoying when they try to use an old road with no gap between the car and the ditch, and we all get backed up behind them.

I share your conviction entirely, though I cannot help but wonder , somewhat worriedly, if one day there might accidentally occur a fusion of a neek with a ferral youth; the thought of such a creature roaming the streets is a thought really too awful to contemplate....

The thought that they could combine and gang up on the rest of us is truly alarming. The result could be neeks in hoodies squeaking street talk - 'safe fam' and suchlike - and feral youths festooned with lights like Christmas trees...