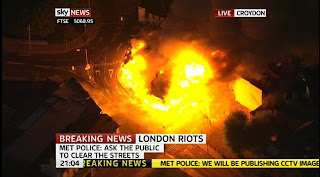 Unless you have been hiding under a stone or engaged in trekking in the more remote parts of Papua New Guinea, it will not have escaped your attention that there has been a revival of the occasional British summer recreation of rioting and looting. The supposed cause is the fatal shooting by police of Mark Duggan in Tottenham (that's in North London overseas readers) on Thursday the 4th August. The shooting led to a peaceful protest at Tottenham police station on the following Saturday which lead to rioting in that area on Saturday night which spread to neighbouring areas on Sunday night which went viral yesterday. No, I don't think the rioting is anything to do with the Duggan case - his family have dissociated themselves from it. The motivation is excitement and greed. It is fair comment to say that the rioters - or some of them - are young people who have little or no sense of having a stake in society  It is also fair to say that much of the policing of inner city areas is heavy handed if not to say downright oafish and stereotyped - but this is scant consolation (or excuse) if you have just been burnt out of your home or business by the rioters. So it's just plain wrong and to talk as I saw Darcus Howe do on BBC News 24 this morning of 'popular insurrection' is total rubbish. That it ain't.

So.... My day in riot zones. Yesterday I was at Edmonton County Court. At about 3 o'clock the message arrived from police. Rioters heading your way. Evacuate and close the court. Rapidly 'adjourned part heard' as we say in the trade. I walked down to White Hart Lane railway station with a law student and an interpreter who had been on my case. Now this is mid afternoon there was a lot of broken glass about from a series of shattered shop windows but the place was eerily calm. There were people about but nothing unusual. It was just like a normal Monday afternoon - apart from the broken glass. We got on a train to Liverpool Street. Uneventful.

After a couple of hours in the office I went to Earl's Court to meet a friend who is over from Macau. We had dinner and thereupon repaired to his hotel to share a bottle of wine. Both my children ring. Am I all right? Did I know Croydon is ablaze (I moved to Croydon about 2 months ago)? I should say that I had got a text saying that the Croydon branch of my gym had closed for 'security reasons' but otherwise hadn't followed the news other than to gather that there had been street disturbances in the day in Hackney, apparently triggered by a police stop and search. My gym is in Surrey Street, Croydon. The below image is from Surrey Street last night. It is of a  woman jumping from her first floor flat. Police at street level are waiting to catch her. 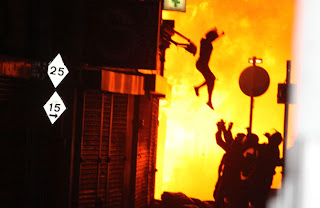 I decided I'd better get back. I travel to Victoria station - again uneventfully. At the back of my mind is the thought that maybe trains to East Croydon (my local station) have been cancelled. No - there is a train stopping at East Croydon leaving in about 5 minutes. I'm on it. It stops at Clapham Junction and then on to East Croydon. Older son is still concerned. 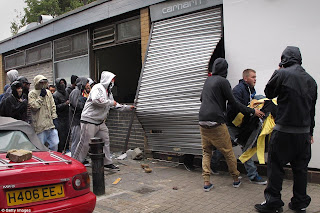 There follow a series of texts. Let the texts take up the story:

White Rabbit: So far so good. Got to Clapham Junction safely.

Older son: Get out of Junction. There are hundreds of kids tearing it apart.

WR: Station was fine. passed through it now.

The railway station was completely peaceful. No sign of the mayhem outside.

OS: Ok cool. Yeah they are completely fucking up Clapham Junction. The riot is a big thing :0

Younger son later told me he was driving through Clapham Junction and kids with stolen televisions were running across his path. He got back safely and kept checking if I was all right. They are good like that.


After a historical digression as regards Brixton (see image below from Brixton last night), there are exchanges about copycat activities in Birmingham. 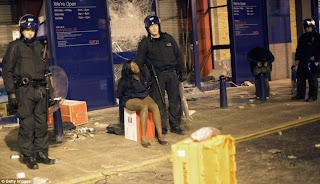 The train stops at Selhurst. This is not a scheduled stop, I don't like this. Have they closed East Croydon and are planning to turf us out at Selhurst?The idea of walking from Selhurst through a riot zone or trying to find a cab is not attractive.

I got to East Croydon. Lots of police on station forecourt. Only one exit still opened. I walk through. A large group of people on the other side of the road. No hostility or anything. They are just standing around. I head briskly back to the flat - a ten minute walk. My ex texts to see if I am all right. I call her, son and friend from earlier that evening. Yes, I'm fine thank you. Meanwhile in another part of central Croydon...

May you live in interesting times. Only one song to end this posting with... For more images follow this link.

Holy crap.
Just... wrong, and stupid, and frustrating...
We had some rioting in our city a few years ago. Just ridiculous.
I'm glad you are/ were safe, though.
And any blog that ends on the Clash is awesome.

I was going to make the obligatory White Riot comment but you beat me to the punch at the end of your post. lol

Seriously though, this happened in LA and other cities after the Rodney King Assault verdict back in 92. San Francisco saw it's share of civil disobedience and it was creepy as hell going to work the morning after the mayhem, and seeing all the destruction downtown.

Thanks for the post. Some of us in the US have been concerned for your safety too. Based upon reports here, I thought the riots were close to your new home. Happy to hear you're OK. No major rioting in the US since 92 Rodney King verdict as JoJo mentioned.

I'm glad you are well, and no property lost as well. What is not mentioned here is that in the Rodney King Riots, nearly 20 years ago, more than 50 people died, thousands were injured, some 1100 buildings burned with a billion in losses, in 1992 dollars.

I thought this summed up some of the key differences between the U.S. and the U.K., in the context of guns versus not guns:
"Open gun battles were televised as Korean shopkeepers shot at the mob to protect their businesses, and most likely their lives, from crowds of violent looters, some of whom were armed." (from wikipedia, which I checked for a handy - if lazy - reference for the specific numbers).

You have shared a great information about Facial Rejuvenation Battersea Junction and Childrens Dentist Clapham Junctions.Which are very