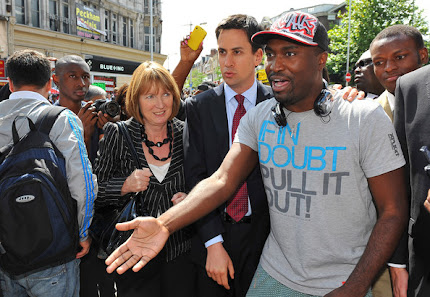 A few random thoughts. The header is 'after the riots'. I think that's it. The killing of the three young men in Birmingham has caused such a wave of disgust that there will be no more riots. Until the next time.

The above photo is the most bizarre - as opposed to dramatic or tragic - to emerge from the riots. For overseas readers and the terminally inattentive the man in the middle with the red tie is Ed Miliband, a leader of the opposition and the woman to his left (okay his right, our left) is Harriet 'Hattie' Harman, his deputy. What is the bizarre bit is the unnaturally excited expression on Hattie's face. The man with the headphones is wearing a T shirt. it reads:


IF IN DOUBT PULL IT OUT!
Surely this prospect could not be the cause of Hattie's blissed out expression?
Best riot related quote comes from journalist Aditya Chakrabortty: 'It was almost Proustian. Except the madeleines were looted'. Ermmm. Quite so.
Most bizarre riot related fact: The Iranian government offered to send human rights monitors to Britain. I confess myself somewhat puzzled by the idea of Iranian human rights monitors. What exactly do they do usually?
More seriously, the man who probably stopped the riots is Tariq Jahan ,father of one of the three young men killed in Birmingham on Tuesday night. He was heartbroken and heartbreaking. I do believe it was his words that basically stopped the riots bar the shouting.
And the shouting will now commence, starting at the recalled House of Commons today. Two nonsenses need eliminating in very short order. Firstly, the riots were not about, or caused by 'the cuts' in some mechanical way. Secondly, nor were they simply about human wickedness without context other than the wickedness itself. This is not a nation at ease with itself. Remember that to the extent there are 'feral' youths on the rampage, there are also - as touched on recently - feral elites. Our rulers - politicians, bankers, media players - think the rules don't apply to them either. Then it becomes no surprise that the underclass take over the former Bullingdon Club role as Lords of Misrule as the former members of the latter move on to other things, such as being Prime Minister or Mayor of London. 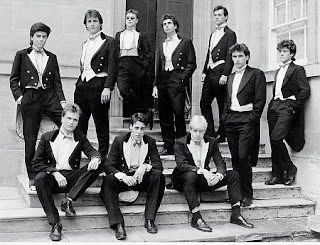 Okay, and as a parting shot some more relevant Clash stuff.

Glad it's over. When that mob mentality kicks in, things get out of hand quickly.

Senseless, sad deaths. RIP to those three young men, and warm thoughts to their families.
So glad it's over.

What do Iranian Human Rights monitors do?

Why, make sure any torture is carried out humanely.

Seriously, they might make sure that Muslims are treated fairly--although I think that would be more appropriate in the States. Can't ship off the indigenous Muslim population to some foreign land to torture a false confession out of them.