Fawkes on state strangulation and Knob of the Week 6.... 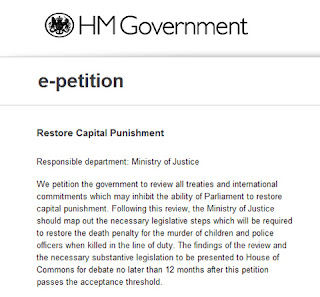 ﻿
Recent events have rather buried the story of Paul Stainey aka Guido Fawkes and his e-petition to restore capital punishment for the murder of children and police officers killed in the line of duty.  He has no chance but 100,000 signatures and the petition is debated in Parliament. Suggestions that Stainey is simply on a self-promotion binge are of course to be deprecated.

In the unlikely event that he reads this, a question from the rabbit. If murder is proved against any person for the killing of the three young men in Birmingham who were seeking to protect their neighbourhood - and neighbours - then that would not be capital murder on Planet Stainey. In what sense are  the murders of children and police officers killed in the line of duty 'worse' than the Birmingham deaths if proved to be murder and thus by exytension more 'deserving' of the death penalty? I ask as someone opposed to capital punishment in all circumstances.

Or are we in self indulgent bollocks territory here? 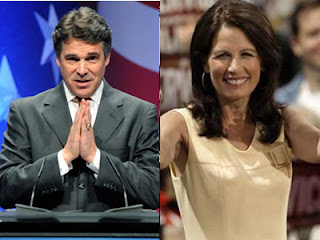 Which leads seamlessly to another Knob of the Week Award and the first joint award of this prestigious prize. The rabbit declares the joint winners toibe Republican presidential candidates Michelle Bachmann and Rick Perry. Bachmann has recently left her church - a body being of the opinion that the Pope is the antichrist. Now there are many criticisms that can be made of the Pope but the criticism that he is the antichrist suggests not playing with a full deck so Bachmann (a) looks a flake for being a member of such a church in the first place and (b) looks opportunist for having left it as she launches a campaign for the Republican nomination, it presumably not having escaped her attention that there are millions of US Roman Catholic voters out there who might be less than impressed at the thought of an adherent of a church considering their spiritual leader as the antichrist. And as for Perry - well it is hardly coming over all Dawkins to view this as wholly inappropriate for a political leader in his capacity as such. It didn't work by the way.

While on the subject of knobs, follow the link for some innocent fun at the expense of 'Dave', a Prime Minister. Hat Tip to Nathaniel Topley via Charon QC.

I'll say a little more about the riots soon but must dash - with no great expectations - to see Thingy of the Planet of the Apes. Some clown in central Croydon was wandering about 'singing' the following song tunelessly the other day. He wins deputy knob.

Oh, man - I love your Knob of the Week posts! Also, I need to remember to start calling people knobs more often. Sure sounds better than "fuckers" coming out of my mouth all the time. Ha!
Oh - and of course you're spot on with all of them. Bachmann and Perry - JOKES! Loved the piece about "Dave", too.

you need to do knob of the week more often.

... might have to come up with a new title tho, which could be tricky.

love the nat tapley piece which i linked to from charon. ironically i was about to blog (with fewer facts) on exactly the same theme - that cameron is spot on about the sickness in society that comes from the unprincipled drive for mere stuff.

defending some riot cases at the moment and boy are they getting crucified by the courts! decisions way out of kilter with what the same people would get for the same actions at a different time. and the bail decisions...! not often shocked but on saturday i almost stood up and shouted at the dj. i only hope we're taking this one to the crown court.

One slight problem with wanting to restore the death penalty, as you well know--the 6th Protocol of the European Convention on Human Rights prohibiting capital punishment except "in time of war or imminent threat of war" was adopted in 1998. The last remaining provisions for the death penalty under military jurisdiction (including in wartime) were removed when section 21(5) of the Human Rights Act 1998 came into force on 9 November 1998. On 10 October 2003, effective from 1 February 2004,the UK acceded to the 13th Protocol, which prohibits the death penalty under all circumstances, so that the UK may no longer legislate to restore the death penalty while it is subject to the Convention. It can only now restore it if it withdraws from the Council of Europe.

How likely is that?

shit! you mean we can't just kill people at will? when did they come up with that 'law'?

Thank you for sharing your experience. I just wanted to say that I really enjoyed reading your blog. You have good views, Keep up the good informative info.