Of riots and sentences and even more Christine 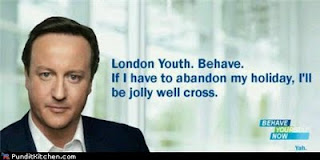 David 'Dave' Cameron, a prime minister, has not by general consensus had a good - I struggle for the phrase - breakdown in social norms period. I mention in passing that the rabbit has received an e-mail nominating Cameron for the hitherto nonexistent Knob of the Year award. You got it! Cameron has appeared peevish, superficial, not quite on top of things - oh and various beastly people keep reminding him of his Bullingdon Club past. Invitations to 'Dave' to give a rendition of the famous chant 'Buller, Buller, Buller! Buller, Buller, Buller! We are the famous Bullingdon Club, and we don't give a fuck!' are unlikely to be greeted with a favourable response.

So 'Dave' has gone for that old standby for politicians in trouble, playing tough. Oh yes, he is tough. Words can hardly describe the toughness that is 'Dave'. In full on showboating mode, 'Dave' pronounced 'what happened on our streets was absolutely appalling behaviour and to send a very clear message that it's wrong and won't be tolerated is what the criminal justice system should be doing'.

Now as a legislator, 'Dave' is entitled to alter the criminal justice system in any way he sees fit - not matter how idiotic - but where 'Dave' can butt out is as regards providing the mood music to a certain approach to sentencing. It's a seperation of powers thing. Inevitably Home Secretary Theresa May has joined in the 'tough' rhetoric. From Labour a deafening silence - Labour decided in the Blair era that it was never again going to risk the 'soft on crime' label and has duly maintained a stony silence subject to coded - even impenetrable - comments by Miliband (E). Grudging respect has to be given to some Lib Dems for actually standing up to this farrago of bully pulpit posturing.

Just a few comments. One subtext is the moral panic as regards Facebook/Twitter as if the riots were all orchestrated by these media. I suspect the proposition is overstated, as is the proposition that gangs were the driving force behind the disorder. Now gangs undoubtedly exist and are undoubtedly in many ways a menace but I do not accept that the events of last Sunday to Tuesday were instigated and manipulated by a collection of 15 year old Napoleons. When the likes of China or Mubarak's Egypt close down or hyper regulate social networking sites then we rightly cry foul. Some overexcited media talk and we are in danger of sleepwalking into regulation ourselves.

The proposals to evict council tenants if an occupier - not necessarily even the tenant(s) - is convicted of a riot related offence. This smacks of collective punishment - outlawed in times of war by the Geneva Convention. Why stop at eviction? How about some West Bank style house demolitions?

Sentencing - yes, some sentences are off the wall kneejerk responses. Also, the climate in which the normal sentencing guidelines appear to no longer apply produces bizarre disparities. For example in one case in Bury St Edmunds a 17 year old escaped custody after posting to his Facebook friends  'I think we should start rioting - it's about time we stopped the authorities pushing us about. It's about time we stood up for ourselves for once so come on riot - get some - LoL'. We are in silly kid territory here. He received a community rehabilitation order and a year's ban from social media. Meanwhile Jordan Blackshaw, 20, and Perry Sutcliffe-Keenan, 22 - both of previous good character - were sentenced to 4 years imprisonment for inciting a riot that never happened on Facebook. Similarly and equally contentiously, a student with no previous convictions was sentenced to 6 months imprisonment for stealing £3.50 worth of bottled water. Over the top? Even in the context if a riot, the rabbit thinks so.

In a way most troubling of all - because of the presumption of bail which follows from the presumption of innocence - large numbers of people who would undoubtedly be granted bail with little difficulty in another context are being remanded in custody. It has never been suggested here that the particular problem of the riots has simple causes or invite simple solutions but the one thing that must be true is that the powers that be cannot imprison their way out of the problem. 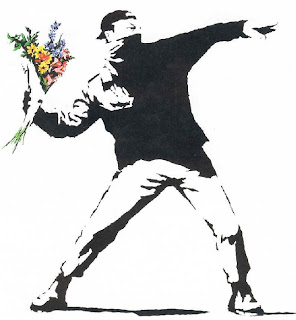 Plus the rabbit is shocked to have to announce that Piers 'Moron' Morgan has so provoked poor Christine with his impertinenvce that she felt herself constrained to walk off set. There is no excuse for bad manners, I am sure all will agree. Hat Tip to Catchy

Great post. Always sad to see politicians making rash decisions to sweep immediate problems under the rug at the expense of a fair and balanced justice system. It never seems to occur to them that perhaps some of their prior political decisions have contributed to the social unrest.

How is year's ban from social media imposed? Does the lad who has this sentence spontaneously combust if he touches a keyboard?
Sx

heavens wasn't piers a brute! all that asking questions kinda stuff. he scared me. like jeremy paxman was in the room.

scarlet - they tag his keyboard and it reports back to big brother if he touches it. no more single-handed surfing for matey boy.

"We could always take a leaf out of the IDF's book and take along a bulldozer or three to flatten their hovels?"

Such comments are not Statements of Official British Army Positions.

I got this huge boost of hits yesterday, people madly googling "Christine O'Donnell in ladybug costume"--yes, I think I *am* the only one who has that one.

Scarlet Blue - They wire the miscreant's computer to an explosive device. He presses a key and...

Take no notioce of SW's theory. He's being silly...

SW Indeed - the impertinence of asking Christine a question she doesn't want to answer hardly bears thinking about. Great friend of freedom that she is, there are limits to freedom I'm sure all would agree.

Laci - Not too surprising given the forum.

People should get out more.

certain people, i have always maintained, should get out less.