You thought the squid thing was bad? 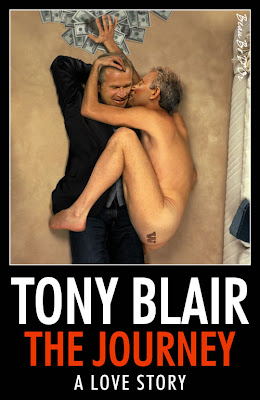 How horrid is that? The background is that My Little Tony Blair has produced a memoir (for a reported £5 million) called The Journey. Beau Bo D'Or (link to left) has produced a mock cover, mostly echoing the infamous pic of John Lennon and Yoko Ono in bed (which if anything was even worse).

After all that unpleasantness, I see that I'm off to Tamworth tomorrow. I've blogged on the Tamworth pig before, Here are some Tamworth piglets. Endearing or what? 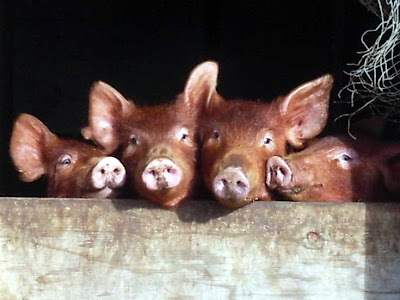 Oh that photo (Not the pigs) is putrid and vile... and yet, it's genius! I love it and hate it simultaneously!

The piggies, are precious. All babies are, no?

Thanks for sharing, as always.

Peace and have a safe journey your own self,
pf

As one who is sick and tired of idiot clients launching into a 5 minute story prior to identifying themselves, I say in my own snarky way, "And you are...?" all the time.

The Dubious Bush-Blair Weasel pic puts a new meaning to the "special relationship", but Britain has always gotten the shaft in this deal.

I'm with Jo Jo as the clients do call and start ranting about their cases when the brief is conspicuously absent from my presence. Unfortunately, I am less polite and it's along the lines of "who the eff are you?"

OH SWEET JESUS! THAT IMAGE IS BURNED ONTO MY EYES! PLEASE STOP THE IMAGES! IT HURTS!

Yo Blair!
Now we get it.
'You are?' ... how annoying.
Like the cold callers who start with 'Are you the householder?'

Hey, White Rabbit, I know you go over to Savannah a lot, seems she has made it subscribers only, any news on that sir?

Have fun in Tamworth. Sounds like a fucking good time to me. NOT.

Love the Blair/Bush photo. Wish I had found it first. ROBBED!

whoa, thought i left a comment earlier...*yikes*...maybe it was the eye bleach i needed, anyway, blog is open, it was a mistake. xoxoxo