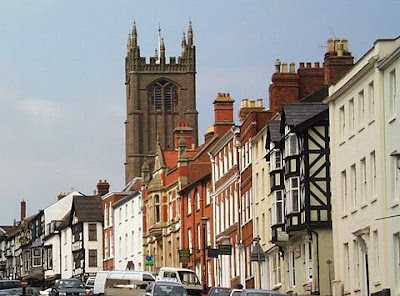 I don't think that I'd ever even been to Shropshire until I started working out of Birmingham but I have been there quite a lot for work reasons of late. i have to report that it is rather lovely (well apart from Telford, a typically plastic new town I have been suitably rude about already a while ago). Shropshire is obscure. It's tucked in the corner where the west midlands meet Mid Wales. The best parts are the Shropshire Hills. I went through them by train the other day. I was trying to work on some case papers but had to keep looking up to take in just how pretty my surroundings were. Here is one image of the Shropshire Hills below. The picture above is Ludlow, a pretty and historic town where the heart of Arthur, Henry VIII's older brother who died in Ludlow castle, is buried in the local Parish Church - unlike the rest of him which is variously described as buried in Westminster Abbey and Worcester Cathedral.. . 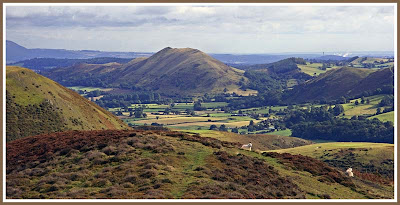 I was amused when passing by I forget quite where on my way to Ludlow to see a sign to 'The Land of Lost Content'. What exactly that was remains obscure but is a reference to A.E. Houseman's A Shropshire Lad.

Into my heart on air that kills
From yon far country blows:
What are those blue remembered hills,
What spires, what farms are those?

That is the land of lost content,
I see it shining plain,
The happy highways where I went
And cannot come again.

Dennis Potter (for the unacquainted a British Playwright who worked only in television because he believed it was the medium for the age) did a play, set in the summer of 1943, called Blue Remembered Hills back in the late 70s. It was up there with Lord of the Flies as a portrayal of brutality - mental and physical - among children

The clever thing was that he had the children played by adult actors, including a young Helen Mirren. See if you can spot her (okay, it's not that hard). 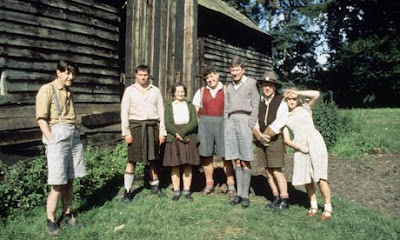 One of my biggest regrets is that I never made it over to the UK again, after our 1 week high school trip to London & Paris. I adored England and loathed France.

I Have Never Been To Shropshire.But It Sounds A Good Destination.Maybe I Need To Give The Place A Whirl, if only to see the locals & their rather long legs!

Our nearby Ludlow (http://en.wikipedia.org/wiki/Ludlow,_Illinois) isn't nearly as picturesque. It was eaten by giant locusts in the 1950's as they made their way to Chicago.(http://www.youtube.com/watch?v=uqVL8blr-rw)

What a lovely place. Lucky you to get to visit there. I miss the UK. It's been over 20 years since I've visited.

Have a good weekend.

I am sorry and apologies to any Shropshire people here but I've been loads and it is fucking horrible, forgive my French and Shropshire folk (excluding Telford) are some of the meanest and weirdest you'll ever meet.