A message from gallant little Belgium.... 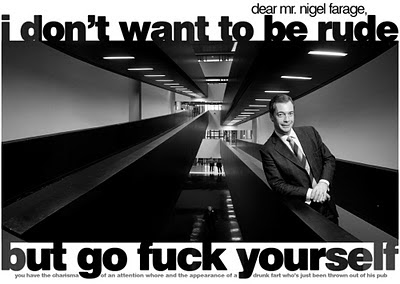 ....endorsed by the rabbit. For the benefit of non-European reader and the terminally inattentive within, the above is Nigel Farage. He is leader of the United Kingdom Independence Party (UKIP) - described by Conservative leader 'Dave' Cameron in a rare moment of lucidity as a body consisting of 'fruitcakes, loonies and closet racists' - which about covers the field. The inoffensive Van Rompuy - an former Prime Minister of Belgium and now the President of the European Commission (and thus slightly more well-known than the average Belgian (not counting Georges Simenon who is dead and Tintin who never existed in the first place) has incurred Farage's wrath. One may wonder why as the worst that can be said against him is that he looks like a cross between a smurf and a benign version of Gollum. Apparently it is for being sort of head of a body Farage has an obsessive hatred of (a hatred that does not inhibit him from milking it for copious amounts of public funds) and he came out with a mindless barrage of personal abuse in the Europeasn Parliament, prefaced with 'I don't want to be rude' before being exactly that in spades.

Now Belgium bites back (see above). Serves the little scrote right.
Posted by white rabbit at 17:25

Yeah, Van Rompuy does look a bit like a benign Gollum.

Couldn't we include Hercule Poirot in the list of famous Belgians? Perhaps the reason that fictional Belgians are more prominent is that the place is so small and they are either confused with the French or Dutch. Or is that whether they are French or Dutch?

As the Belgian Tourism board commerical say:
Belgium: Europe's suprise package. And the suprise is that you can see it all in a day. Er, Day trips from your Hotel in Brussels

It was an interesting place to have spent nearly a year of my life.

President of the European Union, not the Commission (that's some former Portuguese PM), which does give a little more weight to Farage's farrago while excusing nothing about his boorish conduct and certainly leaving the pot/kettle problem as large as ever.

Don't overlook Jacky Ickx, by the way, one of the best drivers never to win a world championship. Belgium has done pretty well, over the years: we haven't even mentioned cycling yet.

I bet you can't say that once!

it's curious that, when someone prefaces a comment with 'i don't mean to be rude' they are lying, but when they preface it with 'i'm not being funny right' they are invariably correct.

Yes. It does serve the little scrote right! Sheesh!

Politics is so banal. thank goodness we have each other to keep it interesting! :-p

I was quite impressed by Farage in an interview I saw on TV. He is a bit of a character, and seems to be his own man. Shame that UKIP is full of (alleged)criminals and wasters.

Thanks to all for Belgian stuff and to Peter Groves for correction. Roddy - welcome to my humble blog. I like the reference to 'alleged' criminals. It put me in mind of Auberon Waugh and his reference to Jeremy Thorpe's 'alleged penis'.

farage is 'his own man' because nobody else would want him.

And let's not forget Antoine-Joseph "Adolphe" Sax, Belgian inventor of the saxophone, and, unlike Farage, responsible for a lot of happiness.