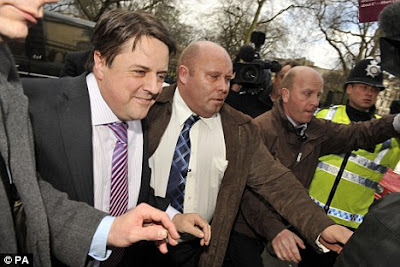 With apologies to those out of these loops this posting involves (a) law (b) politics and (c) British stuff. I will try and explain. The fat oily slug with the striped tie above is Nick Griffin. He is leader of the British National Party, and as is usual with persons of such predelictions, a very poor advert for the white race he is so attached to.

The British National Party (BNP) was founded in its present (second) incarnation in 1982. At first, it was clear to a moron in a hurry that it was a neo-nazi party because it said so. In 1999 the fat oily slug became Fuehrer - I'm sorry, I don't know what came over me - Leader. There is a long version and a short version of what then happened. Let's go for the short version. Griffin is at least fly enough to realise that holcaust denying, Hitler loving, obsessively anti-semitic overt racism is box office poison. He therefore set about sanitising the image of the BNP for official purposes - and in particular electoral purposes. The limited but not insignificant gains in local, Londonwide and European elections shows that to an extent this strategy has worked. The exercise is of course purely cosmetic and the nasty stuff bursts out fairly regularly. Griffin himself carries a lot of holocaust denying, KKK loving baggage. He is standing against Labour MP Margaret Hodge in Barking in the upcoming election. He is expected to do very well in a drab, angry east London outpost, helped by the fact that Margaret Hodge exemplifies everything that is dreadful about New Labour. As an Islington residing multimillionaress she is an easy target. There is a serious point here, the characterisation of New Labour as a bunch of metropolitan snobs is pretty on the money and their ignorance as to the circumstances of life for the white working class and their mystification at its resentments is palpable. they really don't get it. Griffin gets it, though. Therein lies the danger. But I digress...

Enter the Equality and Human Rights Commission. It issued county court proceedings against the BNP in respect of its constitution and membership criteria in September. These - readers will be amazed to discover - restricted membership to those within what the BNP regards as particular “ethnic groups” and those whose skin colour is white.

Equality and Human Rights Commission won. The BNP amended its constitution in a way described by Judge Collins QC as - erm - 'cosmetic' when the case came back to court last Thursday. Even with the overtly 'whites only' clauses in the constitution removed, two clauses in the amended constitution were still held to be indirect discrimination. Membership of the BNP was frozen by the judge until these matters were - erm - resolved.

I headed this posting 'I really don't get it'. What is the point of this exercise by the Equality and Human Rights Commission? Now either one of two things will happen. Either the BNP will jump through an additional hoop for the sake of avoiding further trouble. If they do this to the satisfaction of the Equality and Human Rights Commission and/or judge, does this mean that in reality they are any different? Of course not - they will still be a racist and fascist party with a thin - if not to say transparent - veneer of pretended respectability. Or otherwise they refuse to comply and are made pseudo-martyrs. I repeat - what is the point of this exercise - on either outcome?

None whatsoever so far as I can see. Well the exercise has cost the BNP £100,00 in costs, which is pretty funny, but apart from that...

Perhaps if the Equality and Human Rights Commission fancy further pursuit of this hobby horse, they may care to take a look at the British People's Party , a body of overt neo-nazis who consider the BNP insufficiently nuts. Their website, quite apart from doing a tasteful line in merchandising featuring an Adolf Hitler Bust, not to mention a jolly SS Death's Head for a mere £4, has an overtly 'whites only' membership policy. 'I declare that I am of European descent...' seems pretty clear enough. The Equality and Human Rights Commission could get after them but what would be the point? Even if they jumped through the requisite hoops (I doubt they would - they would love it and would just stick two fingers up - all the way to jail I daresay) what would have changed in reality?

Fascism should be resisted. I still adhere to the now seen as old fashioned 'no platform' position. I would not debate with the BNP, share a platform with them or do anything that would give them legitimacy or normality as a political body (and yes I know they are a legal party - well sort of - before anyone says so) but this is not the way to do it. It is legalistic. prissy and totally misses the point.

Below is footage from Lewisham - 13th August 1977 - showing how to deal with that sort of person. The young rabbit was there.

Well Said Rabbit.
I wasn't at Lewisham but I joined many 'Ant Nazi League' rallies in Manchester.
And then there were the 'Rock against Racism' festivals.

Thank you Kaz. I'd wondered if I was talking to myself.

Well, you know I'm no fan of the BNP rabbit, my web stalker is of that ilk and it was my challenging of his racist bullshit that has led to his smears and attacks.

The Nazi, bigoted bastards do not like it up 'em, I can tell you that sir.

Fleur - Take the antidote as supplied above!

Hmm. I agree that forcing them to change the constituation isn't going to change how they think, but I'm not sure saying "We won' try to enforce equality laws because people will be bigoted whatever we do" is the right answer either.

The BNP, sadly, are relatively high profile and I think the Commission was in a position where there was a very public, blatant organisation which clearly breached the rules - I think they were right to bring the case, not because I think it'll turn Griffin and his gauleiters into civilized people but because if they hadn't, they're effectively sayingthat it is acceptable for an organsiation with those rules and those attitudes to be a part of our political lanscape.

The british People's Party are no doubt at least as unpleasant but they are not in the public eye to the same extent.

(And of course, the fact that the case costs the BNP £££ and made Griffin look even more of a clueless twunt than normal is a bonus!)