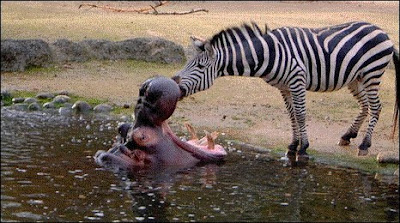 Apologies if you have seen this before, it's not an entirely fresh story but there have been strange goings on at Zurich zoo. The zebra above stuck its head into the hippo's mouth (this is not advisable - hippos can be notoriously grumpy and you really wouldn't want your head between the hippo's jaws) but the hippo just keopt its mouth open and let the zebra get on with it. Don't ask me why - I'm not an animal behaviourist - but the zebra was cleaning the hippo's teeth. Very thoughtful of it too. Hat Tip to the Dental Maven - who takes a professional interest in these matters.


Here is another song I have already posted but in a different version. I posted a live version of Drive All Night a while ago but here is the studio version complete with a rather fine clip of night driving. From the comments on Youtube the clip puzzled American viewers with the traffic being on the 'wrong' side of the road.
One concluded it was Australia because Britain surely couldn't have so many big rigs. Oh yes we can. It's the M1, Britain's first motorway. Oh and the song is just a great love song, complete with Clarence Clemons doing wonderful things to a saxophone - as is his habit - half way through or thereabouts.


Oh - and Easter is a time for giving flowers, so here is White Rabbit's gift to his readers via Banksy. Oh, and for some Easter reading here, from the Huffington Post via Mahal, is a list of the 11 most surprising banned books - I wonder what on earth it said in that dictionary! 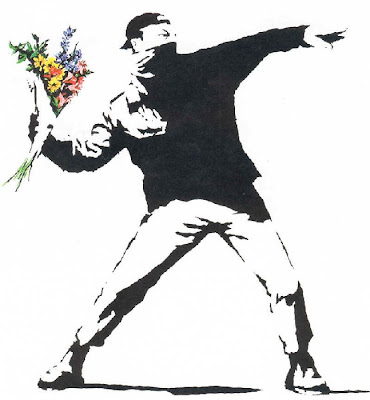 It's amazing how two species like that can get along. And then I go to the post office and I hate everyone I see. Fucking humans!

reminds me of a line from ghostbusters, sugar...dogs and cats living together... ok, something gets lost... sending you cyber flowers, darlin...or maybe, i'll find a card...xoxoxox

so, i thought i had a n email address for y'all, but i do not. so at some point this week there will be a card posted just for you! xoxox

Earl - one of many instances of curious co-operation between animals. But yes - the Post Office is a place to go and practise your general misanthropy over here too. Bloody people!!!!

JoJo - I did think of you when I posted this. I'm sure you'll bear up :D

Happy Easter and the rest of it back to ya!