bonkers conspiracy theories and the joker 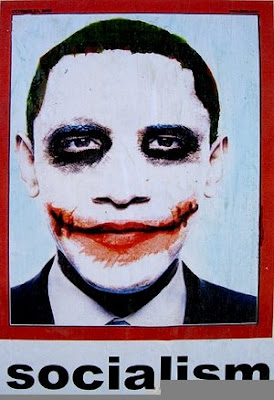 I've been in two minds about whether to blog about this for a while. It's mostly about the bonkers conspiracy theory doing the rounds that Obama is inegible to be President of the United States because he was in fact born in Kenya and not Hawaii and is therefore ineligible by virtue of provision in the United States constitution that "no person except a natural born citizen... shall be eligible to the office of President". What a natural born citizen is gets a bit complicated but includes McCain (who was born in Panama) but apparently would exclude Obama if he was born in Kenya as opposed to Hawaii. For the benefit of those of you who have been asleep for several weeks as the thing gained traction, the conspiracy theorists are called 'birthers'.

Now this is nutcase central and there is no point in reciting the arguments why it is obvious that Obama was born in Hawaii and not in Kenya save to say that if he was not born in Hawaii then the Health Diirector of the State of Hawaii is in on the fiendish conspiracy by authenticating the electronic copy (records were digitised some time ago) by reference to what must be a forged paper birth certificate and the Obama parents showed remarkable precisience in putting utterly phoney birth announcements in the local press to skank around the US constitution so that their son could become President on a false prospectus. Sneaky stuff or what? But conspiracy theorists treat all material adduced in refutation of the conspiracy theory as further proof of the evil conspiracy. the more cogent the material in refutation, the more fiendish and thorough going the conspiracy.

Amusingly, the birth certificate was originally produced to address blog rumours that Obama's middle name was - guess what? - Mohammed! I can only declare my surprise that his middle name was not rumoured to be Satan (more of this later).

Bizarrely - a Kenyan birth certificate duly appeared for our man - headed the then (at his date of birth) nonexistent 'Republic of Kenya' - whoops! Memo to forgers: do your research!

The US Republican Party appears to be running scared of the 'birthers' to the extent that it is not joining in the lunacy. What is the matter with these people? You don't have to be infatuated with Obama - which I am not - to see the birther thing as drivel. At least Obama is not Bush (good), has reduced the Israel lobby to spittle flecked apoplexy (also good) and has produced a lot of okayish mood music but I am still deeply scarred by (I confess blushing) being very pleased when war criminal Tony B. Liar was elected in 1997. I reserve judgement until it becomes clear beyond peradventure that Obama is not an American Blair.Other bonkers conspiracy theories to be mentioned are 'Obama is a secret Muslim', my personal fave 'Obama is the Antichrist' and Obama is an Indonesian citizen called Barry something-or-the-other (I think at this point I declare conspiracy theory fatigue).

One question that puzzles me is this: what does the constitutional provision that Obama is supposedly President in breach of add to anything? It seems to contravene the principle that citizens of a republic are equals. In Orwellian terms, it seems that some citizens are more equal than others. Why not just get rid of it? Problem solved.

While not approaching the level of lunacy of the above, posters of Obama as The Joker with the word 'socialism' - a shock horror word in the States - have mysteriously appeared in the Los Angeles area. It put me in mind of the Steve Miller song of the same name. Here ya go...

this is what freedom of speech gives us, sugar...the birthers *sigh*

i think the joker poster is someone trying to hard to be the next shepard fairey also out of la...too sad on so many levels.

If he can stop the killing of innocent people then I cannae care less if he is from Stoke-on-Trent.

The hatred coming from the "birthers" is obviously coming from someplace else. The blind belief that President Obama's Hawaii birth certificate HAS to be falsified (even though it has been fact-checked umpteen times) and that the obviously phony Kenyan certificate (there is a whole list of phony points on the document) is real leads me to believe that these people are grasping at anything at all to de-legitimize his presidency.

Maybe because he is black.

Savannah - what can I say?

Earl - The black thing is indeed far from inconceivable as an explanation.

Just wait until they think of a reason to impeach him.

Thanks for explaining this, from one of the most egregious nabobs of nuttiness. (I mean, what the image is supposed to be about.)

(I confess I read that thing, for the trainwreck quality. I'm a bad person :-) )

Helen - That is an insight into Planet Weird.

'All very odd' as one of my (now retired) virtual personas was fond of saying...

Stephen - This is more than passing strange too. I've heard of Ron Paul. He's nuts as well...

One question that puzzles me is this: what does the constitutional provision that Obama is supposedly President in breach of add to anything?

The idea is that a citizen from another country (and we ARE, truly, a nation of immigrants--it ain't just hype) would have divided loyalties.

In recent times, the natural-born citizen rule has been bolstered due to inside-operators like Henry Kissinger (OMG, goes the wisdom, good thing he could never become president!)...also, more plausibly, Arnold Schwarzenegger, who has actually proven he can get himself elected.

And BTW, "birther" is a take-off on "Bircher"--used to describe members of the John Birch Society, a subtle joke folks in the UK might miss. :)