Killer on the loose... 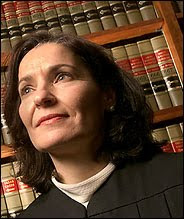 The person above is Justice Sharon Keller - commonly and appropriately known as 'Killer' - of the Texas Court of Criminal Appeals. Our heroine is in a spot of bother. I have blogged on the death penalty and Texas before here but in a so far as I know unique development, Killer is on trial herself! She closed her court before a death row inmate could file an appeal and is presently otherwise engaged on an ethics trial and faces five counts of judicial misconduct.

The case turns on the execution of a man of a convicted rapist and murderer named Michael Richard. The execution was set for the 25th September 2007 but on the morning of the same US supreme court had agreed to rule on whether execution by lethal injection - the case was an appeal from Kentucky but the same method was used in Texas - amounted to cruel and unusual punishment. Not surprisingly in this context Richards' lawyers got busy in drafting an application for a stay but hit computer problems. They contacted Keller, who had by then headed off home to deal with a worker doing some repairs to her house (plainly hugely more important than life and death and constitutional rights and suchlike). At 4.45pm, they requested a postponement of the execution and received the reply from Killer 'we close at five'. Richards was executed later that evening and of course uproar ensued. She now faces charges including denying the rights of a condemned man and is the highest-ranking judge to face misconduct proceedings. I will leave to the reader's imagination whether or not I wish her well but will leave a couple of clues.

A previous gem from Killer was when she attracted a certain amount of oppobrium by denying a man with learning difficulties a retrial despite DNA evidence that appeared to prove his innocence.

Oh and all is not well on the personal probity front either. Killer is in a spot of bother for failing to disclose all of her real estate holdings as required. This was unintentional and not an attempt to hide assets, her attorney (plainly a busy man) helpfully explained. It quite slipped her mind or something to disclose at least seven properties valued at $1.9 million. I wonder if any of them had a duck house or a moat.

There are moves afoot to impeach this charmer. Wonder why?

maybe there IS some point to the death penalty... has she murdered the man? she has no lawful excuse it seems.

I was going to write about this one but got busy with other things.

I'm glad you did.

What do you expect from the state where GW Bush was the Gov? That's what they do in Texas. Wretched state.

I'm still not sure why they have to go thru 3 different stages of the lethal injection. That's why it's cruel and unusual. Just give the person a strong dose of whatever and kill them all at the same time. None of this, stop the lungs, stop the heart, etc.

I've been on the fence about the death penalty forever. I see it from both sides. I'd want retribution of one of my loved ones was murdered, yet it's also wrong to kill people to show that killing people is wrong.

eToro is the #1 forex trading platform for beginning and pro traders.