Mr Fitzpatrick doth protest too much 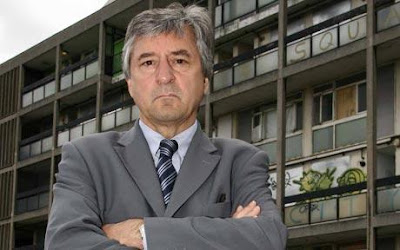 The glum looking fellow above is Jim Fitzpatrick, Labour MP for Canning Town and Poplar. Apparently his constituency is 35% Muslim. Mr Fitzpatrick has caused a bit of a stink as a result of his well publicised walkout (or in Daily Mail speak - storming out) from a Muslim wedding. How so?

Our man and his wife were invited to the wedding of two of his constituents at the London Muslim Centre, a part of the East London Mosque. Having discovered that they would have to sit in seperate 'halls' (so far as I can follow one is the upstairs bit and one is the downstairs bit) Fitzpatrick and lady wife were offskies. Fitzpatrick announced 'we left so as not to cause offence'.

Now I'm wholly unenthusiastic to say the least at the idea of gender segregation at this sort of event. But plainly the happy couple were not of this view and there ya go. It was their day and not Mr and Mrs Fitzpatrick's. Would Mr Fitzpatrick insist on sitting with his wife in an orthodox synagogue and storm out following the inevitable refusal? Somehow I don't think so.

And then suddenly the walkout is all over the media like a rash. Again, how so? Who put the story in the public arena? If it was Fitzpatrick, then he is behaving arrogantly and boorishly and one must ask to what end. Presumably he and his wife were invited to the wedding in good faith by people not in the public eye. It seems a little surprising that at least the possibility that there would be segregation by gender had not occurred to them. If Fitzpatrick went bleating to the media and turned the walkout into a media stunt, then he is an odious little squirt. If, finding himself apparently facing 'Gorgeous' George Galloway at the next election and I daresay having squeaky bum time at the prospect he was pandering to the white working class vote in this episode, then he is worse than merely an odious little squirt.

Googling reveals that there is another Jim Fitzpatrick, an Irish artist. Here is an example of his work. 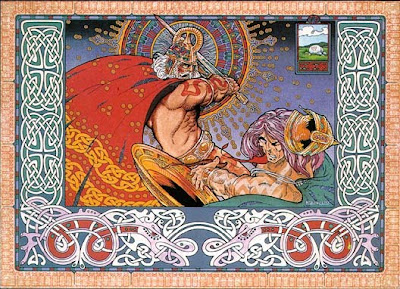 why don't we ever describe politicians in this manner here in the states, sugar? i love it! as to y'all's question, perhaps he was afraid that some muslim-ness would rub off on himself and his dear wife? ;~D

the larger issue for me has always been (and i'm talking about here in the states, too) the arrogance that allows a man to just assume that his is the only possible correct course of action and/or belief. whatever happened to respect for religious beliefs and propriety? i mean, why did he say yes in the first place? xoxo

That's a hard one.
This country, like yours is changing fast. Political correctness being what it is, makes it unacceptable to speak out about changes in anything other than the most glowing terms. But I liked the Australia of my youth, the one of my grandparents and parents. I like the egalitarian streak, the understated humor that pervades everything. The easy going larican and the 'can do' enthusiasm. The focus on sport and outdoor pursuits.
These are aspects of our national character that are worth protecting.
If I was invited to a wedding where I found I was segregated from my wife, because of gender - I'd walk out two. That has no place in this country.
It's not racist - but it is cultural-ist if that's a work. I'm strongly social-democrat / green in my politics but find my feelings about recent social changes in Oz sit uncomfortably with that position.

I'm still some distance from getting an "Australia, love it or leave it" bumper sticker but I am strongly adverse to the idea of this free and fun secular nation changing.

You would think an MP in London's East End would know about different communities' customs, and would also know that the integration and social cohesion in which he claims to believe depends on neighbours respecting each other's rights including the right to be different.
East London mosque co-existed with a synagogue next door for years, in which incidentally Jim Fitzpatrick would also have found the sexes segregated.
From what I've read the couple in this case opted for a traditional segregated wedding to please aged relatives. I'm sure we have all made compromises like that. Jim Fitzpatrick must have accepted some outmoded rites like the oath to the monarch who is head of the Cof E, so he could take his seat as an MP.
You or I when invited to someone's wedding in another faith's premises would deem it an honour and play by house rules, not go off in a huff and complain to the press.
There have been issues in connexion with East London mosque and Muslim politics which someone might legitimately take up.
But this was a family event, not a political occasion. By using it to blame Muslims for lack of integration, Fitzgerald looks suspiciously like someone playing up to ignorance and prejudice, as you say.

This is Britain. If you do not like the customs then go back to the motherland. This is what I have learned and accept. I was born in Israel, our customs are very different to here, but we make allowance for people who are not of our belief. We are glad that we can come to Britain and be free. The important thing is that our people do not demand english people to conform to our ways.
I have seen in the newspapers many times how is not accepted because of different religious beiefs, but we are not all thinking the same.

I think that maybe he was right, sticking to what he thinks. I would do the same.