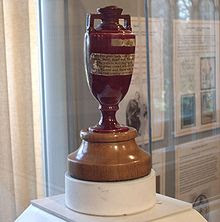 i saw that yesterday on bbc! congratulations! xoxox

Savannah - thankies! Stephen - very gracious. Although hugely exciting, I don't think it compares to 2005 - two very good teams toe to toe - this was more like two of international cricket's middle classes laying on an error strewn, if also gripping, series. England's reaction to victory hasn't been as over the top as 2005 and rightly so - look what happened then....

I would also like to congratulate myself for not posting a certain image with the caption 'The Ashes: Po0nting's spitting blood' The self-restraint has been quite something ;)

I still have no clue what it is all about even after intense tuition but i am happy for you ;)

... Did England win the Ashes ?!?! AGAIN?? Really REALLY??
Good GRIEF, I am such a cricketing GRUNT at times! ( This may be because thrashing a ball with a stick whil trying to avoid topping other sticks over even as the other side tries to topple those sticks, has always been a bit confusing to me - but then I always have been a bit silly mid-on, I suppose!!)
Ether way, I suppose well dones are in order, springing as they do from the land of the Rugby Loving Dragon!

My local coffeeshop computer, has software that blocks your blog for some reason.

I thought it was an urn.