strange but true and lookalike... 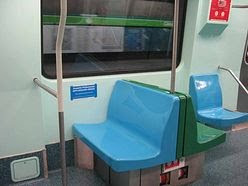 Corpulent persons are being specially catered - if that's the right word - for on Brazilian trains by the installation of special chairs for local salad dodgers. The chairs (see above) are nearly twice as wide as normal chairs and can support a person weighing up to 550lbs and still not buckle under the weight. Above each supersized seat is an icon of a differently slim person and the legend 'priority seat for obese people'. Apparently takeup is disappointing as it is thought the punters are too embarrassed to use them.

Nick Griffin of the BNP is undoubtedly a horrible fat slug. Has anyone noticed the resemblance between him and Danny De Vito as 'Penguin' in Batman Returns? (Griffin is the one on the left) 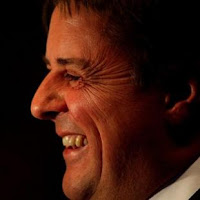 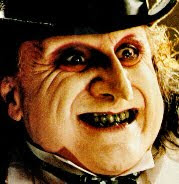 This reminds me of those cinema seats you find at the back of US cinemas. You'd comfortably get three average sized Brits into one, but only one stupendously obese Septic can squeeze in.

JoJo - as regards Griffin and the BNP ignorance is bliss. Basically a bunch of fascists.

Anonymous - I'd quite forgotten septic as rhyming slang - brought a smile to my face. Maybe 2 normally proportioned persons could have fun in a US back of cinema seat ;)

before you rubbish my comment I must say that I am Jewish but cannot condone any attempt to silence free thinking. The Nazis did this in Germany and I still believe that people should have a free say regardless. Any attempt to so would be a step backwards into Nazi Germany.