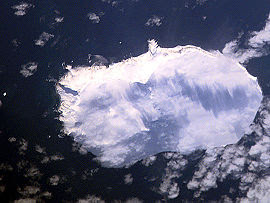 These are dog days. Everyone is either on holiday or wondering why it has to be them sitting around waiting for something to happen when the rest of humanity gets back from holiday. I look out of the window in central Birmingham. The weather is cranking into action for the Bank Holiday weekend - it is grey, cold and raining. The signs of autumn are upon us - the Edinburgh Festival, Notting Hill Carnival very imminent. Then the Last Night of the Proms, the slippery slope to autumn and winter.

I had thought of doing a blog on how I would have liked to cross-examine the now late Senator Edward Kennedy as regards Chappaquidick - complete with a list of awkward questions. I would have enjoyed doing that. Maybe some other time. The appalling nature of what he did still echoes through the decades but the territory is well enough explored by others.

Instead a mention for Bouvet Island (picture above). It is the most remote island in the world, the nearest land being Queen Maud Land (Antarctica) 1,600 miles away. It is a Norwegian dependency and is basically ice covered volcanic rock. Unsurprisingly its population is - and always has been - zero. Strangely, a boat with supplies was found on the island in 1964 but the occupiers of the boat were never located or even identified (the coast is mostly inaccessible). Mildly amusingly, a map of Bouvet Island shows a coastal feature called Cape Circoncision - no translation needed, I surmise. Don't ask me why.

The weird thing is this. Despite being uninhabited, Bouvet Island has an internet country code top level domain (.bv). Why? What's the point? You could construct the most delicious conspiracy theory out of this. In fact feel free to.

On another note, island trivia fans, what is the most remote INHABITED island (or archipelago) in the world? Hmmm?

I am personally of the opinion that the place is absolutely STUFFED to its volcanic RAFTERS with all the Gold/Diamonds/Emeralds/Oil/Gas/Disappearing Wonga from the Banking Crisis that has been'lost' in this era of globalisation and never ever successfully accounted for!
( I also think that ET and lots of Pixies live there too, but what do I know?!)

honeypie, y'all NEED a holiday! and soon! xoxoxo

Earl/Minx - You are both of course entirely correct. Keep the conspiracy theories coming...

Savannah - You are entirely correct too- I'm working on this.

Tristan da Cunha is exactly right. I know a crazy Welshman who is obsessed with the place. I dunno know why. Seems like a boring joint to me.

I would like rovk samples from that island. I have a polished rock and fossil collection.

B.E.Earl: I too have a fascination for Trista da Cunha, ever since I read about it in the National Geographic magazine way back in the 1960s.

Bouvet island is in fact something that has been observered under an electron microscope.

The inhabitants of this patch of land are thick, greasy and rely on the island's only source of food which is the Fish and Chip shop on the south corner of the island.

It's a block of ice. A great place to hold the T in the Park festival, if not only to drown the millions of sad festival goers who would want to go there.