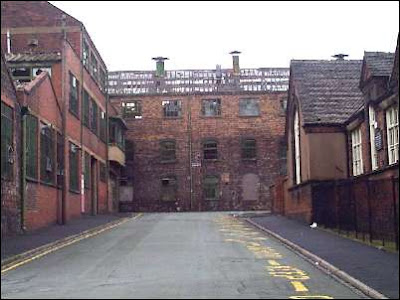 I spent two days in Stoke this week. With apologies to any local patriots reading this – and the people were friendly – what a dump! The picture is a bit of ex-industrial dereliction in Stoke. It turned my mind to the books Crap Towns: The 50 Worst Places To Live In The UK and Crap Towns II: The Nation Decides. These two books were linked to The Idler magazine (whose website I have plundered pretty shamelessly for this piece) and were the results of public nominations. For the record, Hull won first time around and Luton second time. Some of the named towns were counterintuitive. As well as the usual suspects, Winchester, Windsor and Clapham figured in the roll of dishonour. Some of the comments are savage. This is Portsmouth: ‘The town during the day is the usual non-stop stream of half-dead pensioners, teenage mums and shell-suit bedecked amoebic life forms. By night these people really come alive, however, but choose to come alive using vandalism, street violence, verbal abuse, glue sniffing and rapid, canine-like sex in public against lamp posts’. Hmmm…

This is not all chav bashing, however. Berkhamstead: ‘A town so utterly inbred and pompous I can’t spend more than 12 consecutive hours there without coming out in hives. Berkhamsted is populated almost entirely by lawyers, and their odious offspring - simply because they are the only ones who can afford to live there’. Know the sort…

Under amenities in Woking is recorded simply ‘a pond’.

I loved this line too: ‘If the Daily Mail were a town, it would be Sutton’.

High Wycombe: ‘At the weekend it’s full of city twats, who would step over you if you fell down in front of them during the week, wandering around with their families pretending to be awfully polite and pretending they live in the countryside.

Okay, my nominations:
1. Stoke – nuff said
2. Wolverhampton – which would have been top of the list until I discovered Stoke
3. Hull – which does have joint best street name in the world – The Land of Green Ginger – yes really! - but that’s still no excuse
4. Milton Keynes – the concrete cows says it all
5. Coventry – the town planners finished off what the Luftwaffe started
Posted by white rabbit at 10:37

Mercifully I see that no Welsh towns have been mentioned though I do rather feel the need to nominate Newport - a city with the culutral equivalency of Pound Stretchers.....

Swansea leaves a lot to be desired too as I recall

Swansea is nowhere near as bad as Newport; in fact, with all the development and investment going on there at the moment its pretty much on the up. Newport, on the other hand is a tip surrounded by a ring road so complex that its overriding purpose must surely be to have the unwary traveller avoid the town centre altogether.....

You missed Dagenham out. If Hull is a blemish on the anus of the earth, then Dagenham must be a hemorrhoid!

I live in Stoke, you know ;D

I was thinking on a train the other day - what must people think of Stoke when they travel past all the derelict factories?

By the way, you have been tagged on my blog. :)

I love those books. I thought it was tough on Hull being #1 though. I had a good night there once... (I had to get totally mashed first though, obviously).

Any town with a University (a 'proper' one I mean, not a converted polytech) can hardly be the absolute worst, can it?

Besides, I think #1 should be Stevenage.

Anyway, here are the words of the late comedian and broadcaster Linda Smith, who was born in Erith in Kent, a town which she said was so shitty that "it's not twinned with anywhere, but it does have a suicide pact with Dagenham."

Android - I did start by apologising to any local patriots ;)As far as I could see the two best buildings in Stoke are the railway station and - opposite as you come out of it - the North Stafford Hotel. I stayed in this hotel. I wasn't particularly impresed. Then I discovered that it was part of the Britannia chain and all fell in place as to why I wasn't impressed.

Ronald - you do have a way with words! The Thames estuary is indeed a rich source of crap towns. Working east from Dagenham, there is Tilbury, the misleadingly attractively named Stanford-le-Hope and swing north for the ultimate horror - Basildon!

Cheezy - Erith is pretty vile and the south side of the Thames estuary is no better than the north (see above), constituting a procession of dead and alive holes: Dartford, the aptly named Gravesend, Rochester, Chatham and Gillingham. I used to ply my trade down there and recall once many years ago attending Gravesend Magistrates Court. I was applying for bail and a surety was expected. A drunken woman appeared with caterwauling child in tow. This was my surety. The child had a precocious grasp of anglo-saxon and launched off a barrage of obscenities. The drunken woman, anxious to present herself as a respectable person reprimanded the child. 'DON'T FUCKING SWEAR!!!' she shrieked. The temptation to suggest that she was not quite getting the hang of the respectability bit was almost irresistible.


In any event she was rejected as a surety as she had a string of previous convictions she had neglected to mention...

I love those comments! Is Slough as bad as it's made out to be in The Office?