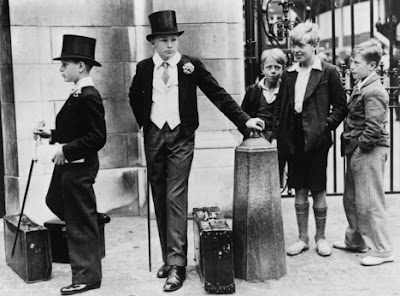 This is a very English topic, so overseas readers, and especially Americans to whom the concept of a school uniform will seem alien and bizarre, please bear with me. There are a lot of silly school uniforms about. They are in over the top colours, usually with added piping in some clashing bright colour. What do these silly uniforms have in common? They are almost all from private fee paying schools and they scream out one message: 'THIS IS NOT A STATE SCHOOL!!!!' There is one London fee paying school which notoriously makes its hapless pupils wear brown corduroy knickerbocker type things with mustard coloured socks and a mustard coloured top. To walk those mean streets thus attired must be a considerable act of courage for the poor little things.
There is a serious point here. It makes these pupils targets. More years ago than I care to remember and before I did the Bar exams, I did a couple of years schoolteaching at one of the type of inner London comprehensive usually characterised as 'tough'. This particular school was tough in the sense that the battle of Stalingrad was tough. Extracurricular activities started at the top of the scale with a successfully executed murder plot hatched in the school playground down to routine lunacy. You get the general idea. I taught in the remedial department, for the 'less able child' and the 'slower learner'. There was also a highly unofficial third category: bright black kids dumped there for disciplinary reasons. It was there that I developed a taste for reggae but that's another story.
Anyway, it was unwise to arrange for school trips to central London for these pupils. Notwithstanding this, the school authorities did so arrange. I took a party of pupils to - I think - the Commonwealth Institute one fine day. En route we passed by Westminster Abbey and there were a group of Westminster School pupils. For the uninitiated, Westminster School is a jaw-droppingly expensive fee paying school and its pupils wore - and may still wear for all I know - cassocks as a kind of school uniform. My oiks spotted them. 'Ere!' They exclaimed. 'Snobs!' There was a gravel path nearby. Instantly, almost automatically as if this were the correct etiquette for such an occasion, my school trippers seized handfuls of gravel and began to pelt the Westminster schoolboys with it despite my wholly ineffectual attempts at restraint. The Westminster pupils disappeared sharpish.
Nowadays, soclal hostility can result in more extreme forms of activity. The sort of uniform under discussion sends a message: 'mug me - better than average pickings highly likely!' Rather like the muppets who wander around with their laptops in shoulder bags with the manufacturer's logo on. Do they want to be mugged???
So perhaps for as long as we have private schools, maybe they could tone it down on the uniform front in the interests of pupil safety? The real answer is this: we have an education system that despite warm words and routine tutting fails to educate roughly half its pupils to the minimum 5 GCSE at A-C level. This is not - contrary to the impression given - a given. It is an outrage in one of the richest countries in the world. Change that and public schools may find that the gravy train runs into the buffers and they are reduced to becoming - erm - public.
Posted by white rabbit at 11:49

Actually, school uniforms are becoming more and more popular with state-funded schools (public schools, as opposed to private schools people pay to attend, which have had uniforms for a long time). Part of the reason given for requiring a uniform in a public school is to break down class barriers, since everyone will be wearing the same thing. That way, you don't have kids on one end in thrift store jeans and kids on the other in brand name gear. So, sort of the opposite of what you've got going over there.

Personally, though, I'd have hated wearing that crap.

I had to wear a noisy uniform of lawn green fire engine red and - sweetly-daffodil yellow whilst at secondary school;the code of dress was strictly enforced such that among the school's contemporaries we were quite the most wierdly dressed pupils for miles around; fortunately this did not result in muggings, though the name calling was at times quite hurtful.
Having said this - and despite bieng educated to a reasonably decent level - my chances of a career at the bar are slim at the very least despite the whacky uniform. The difference between my whacky uniform and those of WestMinster Pupils is the guaranteed place at Oxbridge and the fact that a career at the bar -should they so choose this esteemed path - is pretty much the done deal......

Perhaps the richest schools should issue body army as part of their school uniforms? I can see how this might happen in the future with the way things are going. Here in the States, homeschooling is increasingly popular. The homeschooled kids for the most part score higher on standardized tests and are attacked far less often. The states don't like it, of course, because it means losing federal funding. And it's only possible in an intact, two-parent family in which one of the parents is able to earn a decent enough living to enable the other parent to stay home. And that is increasingly difficult as well.

School uniforms in public schools here in the States comes up from the Conservative Right every now and again, but its been shot down each time thus far.

They keep trying though.

Oh, and I gave your Johnny Cash video "spot the famous face" game a try. I gave you my answers in the comments down there. Fun waste of 10 minutes.

"School uniforms in public schools here in the States comes up from the Conservative Right every now and again, but its been shot down each time thus far."

Not sure what's going on in your neck of the woods, but, as I said, there are plenty of public schools in US with school uniforms. But they're usually khaki pants and a blue or white top, not some crazy knickerbocker based outfit.

Oh School uniforms are a pet hate of mine! Being European and having thus a deep rooted dislike of uniforms of all kinds, I just do not get them..

Mercifully our educational system allowed us to wear to school whatever we liked, hairstyles we liked ( my fringe was so long i looked more like the Dulux dog than a human being!)and i could experiment with various fashion mistakes, ranging from Goth like outfits complete with plastic carrier for my books to good little girl in skirt and cardi( that was on days when i had to visit grandmother after school).

Individuality was more celebrated back then, it seems.

Watching a group of little girls going to school one day wearing strawhats with ribbons my only thoughts were those of pity and empathy for them. Meh!

Downtown Guy said "Not sure what's going on in your neck of the woods, but, as I said, there are plenty of public schools in US with school uniforms. But they're usually khaki pants and a blue or white top, not some crazy knickerbocker based outfit.

I stand corrected. Read up a little on it and it appears that 21 states and the District of Columbia have public schools with uniform requirements. Many large urban areas, in fact. And the stats I looked at were a few years old, so it's probably more by now.

Somehow, having cats instead of kids, this has all passed me by.

Minx - a little harsh on the Bar, methinks. When I was first at the Bar I agree it was a bit like outdoor relief for the more improvident ex-public schoolboy but since as done a lot for women, minorities and people with 'non-traditional backgrounds' (sic). Having said this, the PACH systemm sometimes sttches up the people it is supposed to help. I tried to help an Indian woman get pupillage a few years ago. Got nowhere. In the 'bad' old days I would just have squared it with the relevant people and offered her pupillage but no chance now.

And we wander around in silly uniforms, but at least keep it as an indoor activity...

Today's Independant featured a piece about school uniforms. Advice from a police officer to Oxbridge students.. cover the uniform up if you don't want to get hassled.
Ummm.. not sure if THAT is the right approach to things.

You are right, I probably am bieng a bit harsh; the bar has indeed done much to improve access generally, but OLPAS remains the does continue to stitch people up; what is the point of having a respectable first degree when chambers take one look at rubbish A levels and decide that the rest of the applicaiton isnt worth reading?! ( Note to self: Do NOT rant about OLPAS when the subject is school uniform)

Here the (very good) comprehensive school replaced a smart uniform of white shirt with school tie, v-neck pullover with embroidered school logo, with a scruffy shapeless 'comfortable' uniform (polo shirts with sweatshirts which all look washed out in just a few weeks). It's a town which also has private boys' and girls' schools with smart (but not OTT) uniforms. Some of us can't see any good point in it having become governor policy to force all the comprehensive kids to look scruffy by downgrading their clothing rather than having upgraded it by adding a blazer to the much nicer uniform they already had. They now have no option but to look and feel poorly/half dressed alongside the privately schooled kids, which is not good for self-esteem - I marvel at the poor psychology of it all.

thank you for sharing this useful article regarding how imporatnt is Kids uniform .pashionclothing is the leading industrial supplier in germany and other europian (EU) nation.click here..!!!