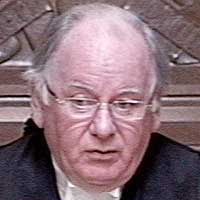 Overseas readers and those of you who have really, really not been paying attention may need to have it explained that Michael Martin is the Speaker of the House of Commons and in a spot of bother at the moment.
The immediate cause of the bother is expenses and Speaker Martin's allies have sprung to his defence. He is a victim of snobbery, they claim. He is being picked on because he is working class/Catholic/speaks with a west of Scotland accent and these factors annoy a media coterie of snobs. If this were all it was about then I would be the first to spring to his defence.
Sorry, but this won't wash. Undoubtedly, the right wing media scent blood and are a pretty unpleasant bunch, to put it mildly. Equally, some of the 'working class hero' routines being wheeled out in his defence are disingenuous and remind me of the hilarious Blunkett 'Nixon Agonistes' impersonation when that priapic twerp was in some trouble a few years ago.
On expenses, he has broken no rules. Having said that, if it is within the rules to claim an annual £23,000 accommodation allowance for a house in Glasgow in respect of which Mr Speaker has the good fortune to have no mortgage, while simultaneously being provided gratis an opulent apartment in the Palace of Westminster, then the rules are wrong. Similarly, why it is necessary or appropriate for the Speaker's wife to be ferried around in taxis on public funds at a total cost of £4,000 remains obscure.
I suspect the core of the controversy is really two things: Mr Speaker is (a) a dislikeable individual and (b) pretty rotten at his job.
On a completely different topic, Yer Rock & Roll 4 is formulating in my mind and I have decided to put its nature to a public poll. Please state your preference as between (a) Jefferson Airplane (b) Velvet Underground (c) some reggae. 'None of the aforesaid' and 'something else, namely..' will be duly ignored ;)
Posted by white rabbit at 13:33

Howsabout some ska instead of the reggae? If not, then I agree with law minx...Velvet Underground.

What kind of reggae? Are we talking Symarip or Burning Spear?

NO IF'S, NO BUT'S, If you are suspected of an offense you will be interviewed under caution and could face a court appearance and a possible criminal record. NO IF'S, NO BUT'S....


I am sure that my paraphrasing is not quite correct but you get the general idea. What goes for those who make the law for us also work against aforementioned hypocrites.

Ol' Bug Eyes, Downtown Guy - we are talking reggae. Ska and Rocksteady are good stuff and I like but reggae they ain't. Symarip are too near the ska end of the spectrum so more like Burning Spear it is...

Too bad - I've got little interest in most rasta reggae, but love some of that old school stuff.

I'd be happy with any Velvet Underground, or reggae if it's something cool like Horace Andy, Gregory Isaacs, or Peter Tosh.

Yes, it would be interesting to know what really it is all about as the expenses have no doubt long been considered 'perks' and outing a few individuals' loose interpretation of the rules is hardly going to make very many people reel in surprise and horror.