the insolence of office 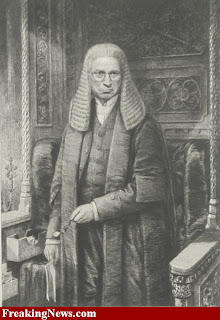 I'm afraid I'm going to be serious for a few moments. All governments get above themselves sooner or later. It appears to be some sort of a rule and does nothing but further fuel my anarchist streak. Taking this on board, the present British government has the insolence of office dripping from its (closed) ears.

The cause of my ire? The latest counter-terrorism bill proposes not only to eliminate juries from certain categories of inquest but also to replace coroners with government appointees.

Now why would they want to that? One answer is that the classic symptoms of the insolence of office are a hatred of that which cannot be controlled by government, paranoia about information being placed in the public domain and a desire to manipulate the outcome in any forum that may pose a threat to its interests or image.

This government hates juries. It has been obsessing about getting rid of them in fraud trials for years. It very much wanted to get rid of the right to choose jury trial in 'either way' offences (offences that can be tried in the Magistrates Court without jury or by jury in the Crown Court at the election of the defendant). This is partly motivated by cost cutting but at core there is a distrust of juries - juries are independent and can do as they see fit. As regards inquests, the bill has a clause that would allow the home secretary to prevent a jury being called to an inquest and even to change the coroner for "reasons of national security". When the "national security" card is played alarm bells should ring, not least as this power is not restricted to terrorism cases. As proposed, a politician can direct that an inquest takes place without a jury in circumstances where it ordinarily would (for example a death in police custody) and a politician can insert a placeman in substitution for the coroner.

Proposition one: that the actions of agents of the state, when they cause fatalities, should be considered by a jury of citizens (okay subjects - but that's another story) of that state.

Proposition two: that the judiciary should be independent and not placemen substituting for the 'ordinary' coroner when it suits the home secretary's purpose. This follows from the seperation of powers - okay we don't have a full seperation of powers but it is recognised that the judiciary (and the coroner is a sort of judge) should be independent of the executive or indeed legislature. Remember why a Supreme Court?

Proposition three: why do they want no juries and placemen in substitution for coroner? Answer: so they can hear evidence in secret on grounds of "national security". The nasty suspicion arises that "national security" includes "embarrassing stuff we don't want in the public domain because it is - um - embarrassing". Justice is done in public. If there is any reason why it should be done in camera it had better be a bloody good one. Who decides if the reason is good? An independent judge, that's who. We come back to the placemen problem.

Sooner or later they will have to have an inquest into the DeMenenzes shooting. Could it be that an inquest in the open could bring out a lot of embarrassing stuff and a disobliging verdict by any jury? I only ask. Also, do they seriously imagine that this stuff will stand up to scrutiny under the ECHR? Somehow, I don't think so.

Oh, Mr. Wabbit! You are turning into Ron Knee!

I am glad that somebody other than a person with a degree in engineering is thinking and examining this government's true objectives. You must watch your back lest you get "marked" by the US and the UK government as a "dissident".

This is just the tip of a huge iceberg, and as we know such a body sunk the Titanic. (which was at that time deemed "unsinkable")

More power to your elbow, sir!

... And yet, as the Bill progresses through Parliament some unfortunate fool has to stand up and declare that this preposterous ( and I'm trying not to loose the plot here, as I am often wont to do with other fragments of casual stupidity, such as the Criminal Justice Act) piece of legislation is actually completely in sync with the HRA, and therefore with the ECHR.
How DO these people manage to get away wih it?! ( and if ANYONE mentions "Democracy", I shall not be responsible for my actions....!!)