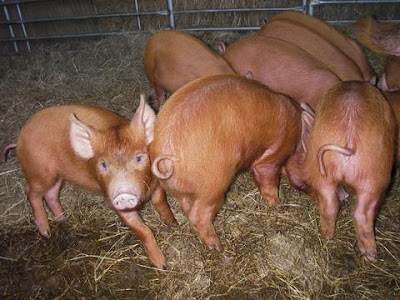 I went to Tamworth today. I don't believe I've ever been to Tamworth before in my life but I've taken to doing a bit of personal injury work to top up the crime and Tamworth has a County Court.

The only thing I knew about Tamworth was that it gave its name to the Tamworth pig. Further researches (into the pig and not Tamworth) were in order. Tamworth pigs are ginger pigs and among the oldest pig breeds but are unsuited to contemporary production methods and are therefore an endangered breed. They may be descended from wild boars which are in my opinipn seriously cool animals. They are hardy little fellows (well actually they are medium sized for pigs) and are called Tamworth pigs as they originated on Sir Robert Peel's estates at Tamworth.

'I like pigs. Dogs look up to us. Cats look down on us. Pigs treat us as equals' (Winston Churchill)

Homage to the Tamworth pig.

who said blogging was a time waster, sugar? who knew about these ginger pigs? (ok, probably a lot of people, but it's new information to me!) ;~D xoxoxo