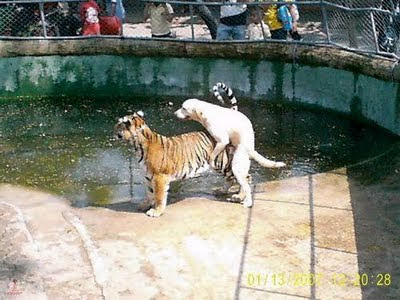 The above pic is titled 'courage'. It might as well be 'desperation' or 'short sightedness'. Hat Tip to Ute via Memphis Steve.

On a more sombre note, following the UN Human Rights Council's vote on the Goldstone Report, the Israeli government and the Israel lobby generally are predictably screaming the house down. Here's a reminder of what it was all about. Warning: some disturbing images and one absolute shocker.

Guilty as charged.... the Switzerland comment by the last speaker was superb.

I've always avoided the Israel - Palestine argument, but that video was powerful. Thanks for sharing it.

Re: Photo of dog/tiger: Oh my *blush*

Mike - I tend to avoid the topic too despite having strong views - it brings the crazies out to play but occasionally I just have to say/put up something.

The video is powerful - I am still in shock at the semi-carbonised dead baby. We didn't get that kind of image in the west. 'Humankind cannot bear very much reality' (TS Eliot)

JoJo - What can the dog have 'thought' it was doing? well apart from the obvious...

That was funny! Love the photo.

Whoa WR... That video clip was chilling. My father was a real history buff, and echoed many of the same ideas about Israel and Palestine.

I normally don't speak up about any of it because many are quick to jump to the conclusion that you are an Anti Semite, and I am not. But I'm not a blind patriot of my own country or any one else's.

Good for you for speaking up.
pf