Suddenly there's a lot of it about 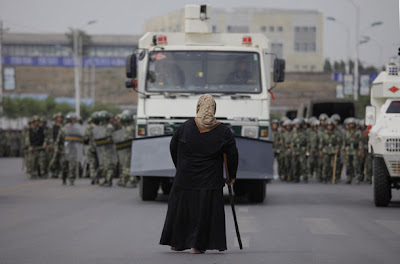 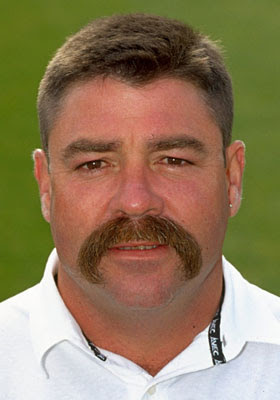 More frivolously, Unique Stephen seems to be getting excited in Sydney - otherwise noted for its Harbour, Bridge, Opera House and bonkers Archbishop - exclaiming 'Boonie Boonie Boonie' in a comment on my last post. This is quite normal for an Australian and need not cause alarm. Continuing my educational campaign for the cricketingly challenged 'Boonie' was an Australian cricketer noted for two things: his alarming moustache (see left) and his drinking talents.
Our man holds the record for consuming cans of beer on a flight from Sydney to London, namely 52 in 1989. This broke the previous record held by Rodney Marsh (45) except there is an argument as to whether Marsh actually finished can 45 and he may only have equalled the previous record held by Doug Walters. I'm very glad I wasn't sitting next to the beer monster at the time given that he once honked all over the pitch at the Adelaide Oval in a WSC game. He went on to score 122 and win the Man of the Match award which shows the power of positive vomiting. He could bat a bit but that's beside the point.
Ever vigilant in the cause of freedom of speech, some particularly insidious censorship has come to the rabbit's attention and needs exposing for what it - erm - is! Twitter has banned Mrs Slocombe's Pussy (see below) from its hash tag tweet list - whatever that is. As is only right and proper, at one point 'Mrs Slocombe's Pussy' overtook Michael Jackson and Iran elections as the most used Twitter phrase. The Nazis at Twitter having done their worst, hash tagging 'Mrs Slocombe's Pussy' now apparently produces 'no results'. Twitter is run by Americans and one explanation is that Americans don't get it and think - perish the thought - that there's something rude going on here. Tsk! A dirty mind is a perpetual feast! Shame on you! Have some more...
Posted by white rabbit at 13:52

Reminds me of the awesome talking Boony dolls they had in Oz a few years back. You got them free with VB (or some equally nasty beer) and they dispensed little nuggets of wisdom whilst the cricket was on tv:- http://tinyurl.com/m5rg8j

Not sure what I'm most proud of as an Australian. The fact that our one time Prime Minister Bob Hawke held the Guinness world record for speed drinking beer: two and a half pints in eleven seconds, or that we seem to have convinced the rest of the world we actually drink Fosters.

Stephen - You don't fool me! As I recall, Fosters is awful, Toohey's is arguably worse and XXXX is dreadful.

But Coopers is very nice indeed.

when i was dealing in wine in a small way i used to go to the wine trade fair. at the end of the day, the ritual was for the australian wine agencies stall (including the very nice chaps from the excellent st hallett) and the bear-like tim adams (every bit as nice and made equally fine wine) to crack a few coopers. after a hot day tasting wine from all countries known to man, a cold coopers was heaven.