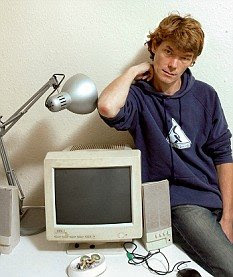 The pic above is of Gary McKinnon, also known as Solo. He is a Scottish hacker and has been diagnosed as suffering from Aspergers Syndrome (by no less distinguished a person than Professor Simon Baron-Cohen (cousin of Brüno or whatever he is called in real life). Gary McKinnon - I suppose I have to say allegedly although there doesn't seem any dispute over what he did - hacked into 97 US military and NASA computers. He is evidently very good at this sort of thing. To get an idea of where he is coming from it is necessary to understand why he was applying himself so diligently to this hacking - he wanted to prove the existence of UFOs, antigravity technology and "the suppression of 'free energy'" (no I've never heard of this either - it's apparently some sort of conspiracy theory).

You get the flavour of the guy - The US government however, its dignity thus affronted, wants to extradite him as some sort of cyber terrorist. He was originally arrested in the UK under the Computer Misuse Act. The CPS declined to prosecute. The US government then went for extradition. The story is really how supine the British Government is in face of the US demands for his extradition. Under British hacking laws - and he contends that the oiffences were committed here - he could face up to 5 years in prison. The Americans want to make an example of him and he could receive a sentence in the US if extradited measured in decades.

And the response of British Home Secretaries? John Reid: approved the extradition with unsurprising alacrity. Jacqui Smith (if you'll pardon the expression) waved the extradition through without even seeking any guarantees as regards bail or return to the UK to complete his sentence. Alan Johnson reprises the Pontius Pilate gig, announcing that his hands are tied. Ther is a more general problem here. And there is a general problem as regards the Anglo-American Extradition Treaty. It is cock eyed in that there is not equality as regards safeguards. The issue of inequality as regards US/UK extradition came up before with what came to be known as the 'NatWest Three' (he typed struggling to work up any sympathy for bankers).

The problem goes broadly like this: The effect of the US/UK extradition treaty is that that UK citizens have fewer rights to due process of law than do American citizens. It centres around provisions in the treaty that require Britain to surrender its citizens on American request without the Americans providing a jot of evidence that they are guilty of anything. The treaty is not reciprocal. The UK must provide evidence of guilt before an American can be removed under the treaty.

What collection of snivelling sycophants agreed to such an unequal and fundamentally unfair treaty? New Fucking Labour, that's who! There have been Parliamentary challenges to the treaty. They have come to nothing. In the particular case of Gary McKinnon, the courts (including Europe) have been to no avail so far. Further comment seems superfluous. Perhaps it's time for us to declare independence and start by telling the US where they can put their extradition treaty.

Australia 649/5 at time of writing, Cruel and unusual punishment.

The uneven extradition treaty was approved by arch-sycophant Tony Blair, who obviously thought that joining Bush in an illegal war was not enough. The purported justification was combating terrorism; although, if they had believed that, why favour US terrorists by making it more difficult to extradite them to Britain than to extradite Brits to the USA? Of course, like much of Labour's anti-terrorist legislation, it is a device to reduce the civil liberties of non-terrorists like Gary McKinnon. His alleged crime was committed in Britain, he was arrested in Britain by British police and it seems confessed to them. If he is to be tried it should be by a British judge and jury.

Whilst working for the YOS I came across a few young offenders with Asbergers Syndrome, they are often very bright, but have problems with what is 'right and wrong'and often just can't understand societies moral and criminal codes. The criminal justice system in this country has let them down for years, this latest story is just another person being put through the bloody stupid system that was created by a monster.

ASPERGERS SYNDROME. Get it right. John Hirst suffers from this.

It is entirely true that the labradors in british government bow-wow to their american masters,. this is no secret.

What it does, however say is what a load of wankers we have in our own "ruling" party.

Has anyone ever read the shite written inside one of our passports? It deems the holder a british "subject" and not a citizen. This is how when some poor person gets into trouble outside of the UK they can wash their greasy hands of you and leave you to die. No family here, I can assure you.

All the people who died in the last war and in the following confrontations to keep this country a monarchy have been seriously mis-lead. fuck this government and all wot sail in them.

(last comment deleted due to a spelling mistoook. Sory)

I suspect the arch war criminal Blair agreed to this to make it easier to send over the thousands of radicalised muslims that a decade of new labour have created.
The cricket is a worry. I have made some rather bold statements on my blog about Englands chances.

Following the rejection of his final appeal, there are fears that Gary McKinnon would not get a fair trial in the US, would be incarcerated in a US "supermax" prison for up to 60 years, all of which have raised concerns that he would become suicidal if jailed in the US.

As all attemps have failed â€“ we urge you to help petition Obama to give Gary one final reprieve.