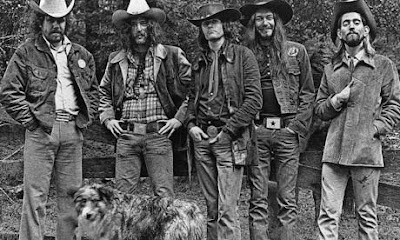 The rabbit was sad to read of the death last Wednesday of John Dawson (right in pic above), formerly of wonderful 70s stoned cowboy impersonators New Riders of the Purple Sage. Their style was generally described as psychedelic country rock - which I suppose is as good a description as any. They began as a Grateful Dead offshoot but secured an independent life fairly briskly. Their appearance as in pic above shows what drugs can do to you ;) Dawson had retired from the music business, become a teacher of English and died of stomach cancer in Mexico aged 64. Their best album was in my opinion Gypsy Cowboy. I borrowed a phrase from the title track as working title of my first - and mercifully unpublished - novel until the title was changed at the suggestion of my then agent to - erm - White Rabbit. But Panama Red is probably their best known album and song. Have a listen. It's a hoot!
Posted by white rabbit at 15:16

thanks for the trip down memory lane, sugar! ;~D xoxox

NRPS (with Buddy Cage and David Nelson) is still touring - Dawson gave them his blessing when they began touring again. They're one of my fave bands to see live (and this comes from a 23-year-old!)

I must admit to getting a bit of a musical education every time I visit this blog, y'know.

So,Bunny,in your learned opinion, whos the better? This lot, or the Dead??

Love it.... my first experience meeting this mysterious gentleman was Pittsburgh in 1978. Yes, I remember meeting ole Panama Red... funnily enough, I have little memory of anything happening right after...

Thanks Rabbit for posting that video. You know, I was a psychedelic cowboy from New Jersey.

Thanks to all commenters. minx - NRPS were good fun but the Dead were unique. Daisy - yes - the memory fades for some reason.

I have a New Riders album or 2. Not really my fave, but you are right, they were closely associated w/ the Dead in their early years. Still, sad that another great musician is gone.

If students don't come to school, it is impossible for me to teach them. The field is kind of, the stadium is shaped kinda weird. COVID 19 isn't thought to be as dangerous for young adults as it is for older people, but that doesn't mean an infection comes without consequences.Three otherwise healthy Alabama millennials talk about how the coronavirus upended their lives, from painful symptoms to ER visits to separation for weeks from family members.Hannah Alexander, 28, of Huntsville, said having COVID 19 was one of the most difficult experiences of her life.Huntsville: Hannah, 28Five days after Hannah Alexander's symptoms began, she wondered for the first time whether she might die."This was the most brutal thing I've been through in my whole life," she said.

The hospital is expected to open Cheap Yeezy Shoes Sale April 21.The Army Corps of Engineers announced the project at a press conference Jordan Shoes For Sale today with Florida Gov. You may not block, inhibit, build upon or disable any portion of the Player, including without limitation links back to our site.

Deborah Birx, one of the two leading medical experts on the White MK Outlet House coronavirus task force, said that Cheap Nike Air Force 1 out of deference to social distancing rules she had stayed away from her daughter house despite her 10 month old granddaughter having registered a fever of 105 degrees over the weekend.

Introductions will be edited out. For Listen Local, Little would host the show and also perform. The report also includes exclusive access to webinars to interact with C level executives from leading China AI companies (via live Q sessions).. Although our internet connection was very limited it was sufficient to be able to read online news reports, and we were also able to make phone calls to family and friends using Yeezy Shoes For Sale an New Air Jordan Shoes Iridium (satellite) phone on board."So, on an intellectual level we knew Coach Outlet Clearance what was going on. Air Force 1 In Store.