Guess who got sacked? 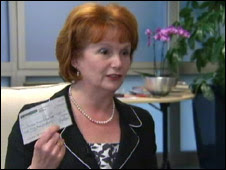 A quick recap for the uninitiated: Hazel Blears is a hideous dwarf who first Blair and then Brown kept in the Cabinet as Minister for No-one Can Remember What. Blears managed to neglect to pay tax on some property she had made a killing on via public funds. Brown pronounced himself unimpressed and Blears behaviour 'totally unacceptable'. Blears 'voluntarily' paid the £13,000 in tax some nasty people had been suggesting she ought to have paid in the first place. She made a big display of wagging the cheque in front of the cameras (see above). Blears was NOT sacked but resigned as part of an attempted Blairite coup against Brown on the eve of Euro/local elections. her timing pissing off the three remaining grassroots Labour members.
So far so grubby and uninteresting.
Enter Lisa Greenwood, a very junior civil servant, who sent an e-mail from her work computer to Ms Blears's website saying MPs had "swindled taxpayers".
The e-mail contained her work address at the Department for Children, Schools and Families (don't government departments have stupid names these days?)Miss Greenwood contacted the minister via a link on a website called - erm - theyworkforyou.com. She wrote to 'I was appalled to see you on national television this morning waving a cheque around as if it was going to make everything OK. You are not sorry at all. (Only sorry that you have been caught.) You are a disgrace. Why haven't you been arrested and why have you not been sacked? Not that my comments will have any impact. I doubt you will even read this'.
Lisa Greenwood was understandably pissed off that the money Blears had trousered until caught out was only £3,000 less than she made as an annual salary. Initially she had tried to send the comment via her personal hotmail account but for some reason she couldn't send it that way. So she sent the e-mail via her work address.
Result - she has been fired for breaching civil service impartiality rules. Blears wasn't sacked - but for this infraction the unfortunate Lisa Greenwood was.
Two questions arise: firstly, why such an extreme penalty exacted for what on any sensible view ought to be viewed as a minor infraction at worst? It just looks plain vindictive. Secondly, how did the use of the work e-mail address come to the attention of the Department for Whatever-it-is-called. Has she been fingered and if so by whom? But there is a mystery here. Theyworkforyou have pointed out that it would never have revealed who the person posting the comment was, and moreover that that comment has never appeared on theyworkforyou. This seems to be accurate. So if this is right, how did the Department for Whatever-it-is -called know about the heinous comment? Do they spend huge amounts of time checking on theoir own staff e-mails? It would be interesting to know. The rabbit is contemplating an enquiry to this effect under the Freedom of Information Act.
On a more cheerful note, what drama to end the First Test! Two points: though I don't knock 20/20 cricket - it's hugely entertaining - it could never produce drama such as that laid out in the last hour or so as Anderson and Monty defied all logic and expectation. Like the Alamo except more so. Secondly, how typically English - to produce a sort of triumph out of a complete shambles. Makes you proud (sort of)... 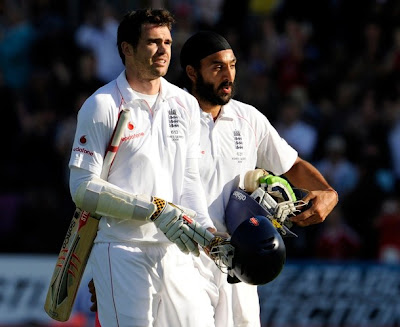 It's all in the software they use now Whiters!

I got caught up with a boffin from the Met a couple of years ago, and he explained that they can do this sort of thing very easliy!
Elder Daught works with lawyers, and I can't even email her sometimes, because they just seem to 'smell', that I'm probably forwarding an innocuous 'joke', and I get it chucked back as inappropriate!

They also chucked back the 'Welsh Christmas song', which I liked a lot...

look to our friend mr.cheney, sugar! the software is out there to scoop up all sorts of information! (and people said i was paranoid!) xoxox

Freedom is only around to protect one thing anymore, companies. And by extension government.

Any sport that last longer than a day is not for me.

Monty saved the day!!! but, as i told you, i am not so sure we can win the Ashes.
This country needs more Monties :(

Big Brother is watching what we all type..
unfortunately in the case of Hazel the redheaded tax dodger he must have been in a coma.

I guess so as regards the surveillance state part 98. Naive of me...

M - here's the last over compliments of cricinfo

104.1
Hauritz to Anderson, no run, quicker ball on leg stump, nudged to leg. Cardiff explodes, then a hushed silence

You can hear a pin drop

104.2
Hauritz to Anderson, no run, flighted on middle and defended

104.3
Hauritz to Anderson, no run, tosses this up on the middle stump and he’s forward. It prompts more emphatic, cacophonous cheer from the crowd. And then silence

104.4
Hauritz to Anderson, no run, huge turn for once but it’s too wide. It’s too wide from Hauritz

104.5
Hauritz to Anderson, no run, drifts in, darts in on middle. Blocked. Blocked.

This could be it. This is the last ball of the match in theory.

104.6
Hauritz to Anderson, 1 bye, wide of the off stump, off the pads and balloons over the slips. They run a bye. They run a bye. Ponting scratches his chin, he looks distraught. Anderson talks to the umpires. No one knows what’s going on! But they shake hands and England have drawn! It’s all over!

I'll refrain fae commenting on anything to do with the British Government, evil stealing lying bastarts that they are.

As for the cricket my friend... it's no that popular in Glesga.

thanks for the add, sugarpie! xoxo

now, what really bugs me was that the vw was oddsilly!

Andrew, that comment wasn't made by Henry , was it *L* no pidgeons or busses to be seen.
and where was Monty's toad all that time??

Strangely the press here is more or less silent on both stories.

M - Not Henry at all but new visitor Scrobs sounds like him - addreeses me as Whiters! :-O
Toad was hiding in Monty's patka cos got too scary...

they should have sacked her for stupidity - does she not know that emails always leave a trail??? why is she doing it on her employer's time anyway. the smart protester sets up a separate account or at least does it from home.

our national red-head treasure was of course the major saviour - geordie collingwood (a descendant of nelson's admiral) the man who got the mbe for fuckall according to the witless antipodeans has earned a medal.

and ponting fuming about the cheating - thank god he would never stoop to any such dirty tactics... ah - fucking -hem! kudos to hauritz who came out and said 'it's what we'd have done as well.' yes it was cheating; yes it's what everyone does.
as the phlegmatic athers said when an aussie sledged him for not walking 'when in rome'.

i hope the later tests will be won by the side who is unquestionably better in them. i hope even more fervently that it will be us rather than oz as in the one just gone.

I have a penchant for ginger dwarves of the Blears kind, especially when they are attatched to my knob. Please forgive her as she shall be undergoing daily up-and-down penance and shall not be available for public comment.

PS her pubes are slightly darker than the hair on her head but her vag is still very juicy...

Ronald - You may be familiar with the expression 'too much information'...