From the BBC via Jailhouse Lawyer 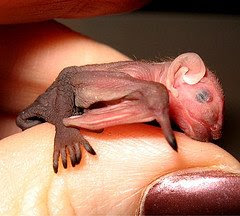 Teenager finds bat asleep in bra
A teenager who thought movement in her underwear was caused by her vibrating mobile phone found a bat curled up asleep in her bra. Abbie Hawkins, 19, of Norwich, had been wearing the bra for five hours when she plucked up the courage to investigate.
When she did, she found a baby bat in padding in her 34FF bra. The hotel receptionist said she was shocked but felt bad for removing the "cuddly" bat. "It looked cosy and comfortable and I was sorry for disturbing it," she said.
She was sitting at her desk at work when she decided to investigate the strange movements in her underwear.
"I put my hand down my bra and pulled out a cuddly little bat.

"That shocked me very much at the time, but it scuttled off under the desk into the dark. I was shaking from head to toe. It looked quite cosy and comfortable in there so it was quite rude of me to take it out. When I realised it was a bat the first thing that occurred to me was how did it get in there.
"I felt quite sorry for it. Perhaps I should have left it there and given it a good home. I did not notice anything as I put my bra on. The night before I had had one or two drinks and I was getting ready quickly.
"The bra was in my drawer but it had been on the washing line the day before. When I was driving to work, I felt a slight vibration but I thought it was just my mobile phone in my jacket pocket."
The bat was captured by one of her colleagues and released.

My mom's had a few baby bats turn up in her house lately. They come down the chimney sometimes in the summer.

"Abbie Hawkins, 19, of Norwich, had been wearing the bra for five hours when she plucked up the courage to investigate"

Five hours? I mean, there is NO WAY she could have envisioned a baby bat in the lining of her bra. But what the hell did she THINK it was?

Anything moving in my undergarments that doesn't belong to me is gonna be investigated toot suite!

That baby bat picture is horrifying, by the way! Thanks!

I like your roll of honour feature. How do you hunt down other bloggers? I'm trying to find more like minded morons, but all I seem to able to find is nerds!

Get back to work, or as my clerk would say, "Haven't you got a set of papers to do sir?".

Hank - and they nest where?

I suspect she had over-refreshed the night before. Quite puts you off your guard as to the possibility that there's a bat in your bra.

Simon - mostly the blogroll was accumulated by sniffing around blogworld. Can't clerks make 'sir' sound like the ultimate insult? ;)

Sorry - middle comment directed to Earl - not that I'm suggesting he wears a bra :-O

They nest in the chimneys in the summer. In the winter I have no idea where they nest, because they'd be crispy critters if they didn't vacate the flue.

Mom's house has 5, I think, fireplaces, so you can see where animals in the chimney is a going concern.

Could this be another British / American thing? The girl was from Norwich, you said, right? I can tell you, I never met a chick in New Jersey who could come up with something like that.