A strange story from New Zealand - a 9 year old girl is in court guardianship there so that her name can be changed. The name her parents gave her? - Talula Does The Hula from Hawaii. At this point I pause to beat my head against the wall. The judge gave other examples of bizarre names in his ruling including Fish and Chips, Stallion, Sex Fruit and - erm - Violence. Now my general rule on officials telling people what to do is I'm against it. Here I make an exception. Being a child/adolescent is difficult enough without having to drag baggage like that around. As for the parents? Moderate words fail me.

Another tiresome example of the professions joining in with officialdom in mindless bossiness has surfaced. The British Medical Journal pronounces that bigger families are as environmentally dubious as patio heaters or gas guzzlers. Oh get lost you arses! This kind of medical pontificating is not confined to the printed word. I heard a mother of 6 on the radio saying that after the birth of one of her children she was gratuitously asked by some medical professional what she was going to do to prevent the next one. She told the medical professional where to get off. Quite right too. There is apparently 1.91 children per woman in the UK. If the rate fell to 1.7, the population would halve in six generations. Hardly an overpopulation crisis. Affluent people tend to have small families. If you are in a poor country and children are your social security system cum pension policy and infant mortality rates are high, you have lots. Remarkably, this state of affairs continues despite the strictures of the British Medical Journal. The rabbit is a father of 2 for the record.

Strange goings on as regards the clip posted on Monday. First the clip was taken down by YouTube and then Memphis Steve (link to left) reports that the link to the clip is blocked at his place of work. What is going on here? the clip is at least still up on the B'tselem website - http://www.btselem.org/english/Firearms/20080721_Nilin_Shooting.asp - A modest proposal: could all bloggers of goodwill copy, paste and stick the link up on your blog. It seems the only answer to the deleters and blockers.

I'm off for a break in rural Bucks so no new postings for a few days but a random parting shot: why are there so many blokes wandering about in Argentina rugby shirts these days? Is it some sort of ironic statement or are we being stealthily invaded? just asking... 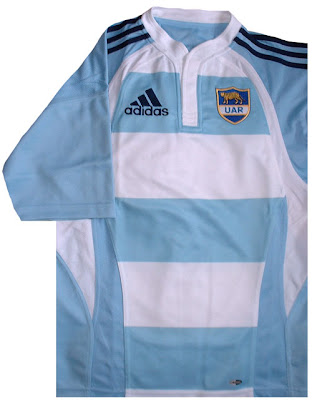 The rugby jerseys are clearly a retaliation for the Falklands War.

They will infiltrate your pubs and sporting events and take over from within. Mwah-ha-ha-ha!

Earl - I suspected as much! I look forward to the British Isles being re-named New Malvinas ;)

I'm not blogging, but I've added the link in my sidebar, anyway.

I hope you have a good break - have fun!

You said, "I'm off for a break in rural Bucks." We are definitely two peoples separated by a common language. Take care.

In my sports-obsessed hometown of Columbus, Ohio, home of the Ohio State Buckeyes, there was a poor girl named Scarlett Anne Grey.

(The OSU colors: scarlet and gray)

I mean, what can you say? At least it sounded pretty! :)

Daisy - Scarlett Ann grey might get away with this if she moves a long way from Columbus, Ohio! I once came across something similar where an unfortunate girl's father was a big fan of Crystal Palace (no account local football club) - the girl's name? Crystal Alice...

Good heavens. I don't think I could be involved in a court case like that...

"Good morning your honour *snicker*, I am counsel for the Plaintiff *choke, sputter* Talula *eyes watering*..." I wouldn't be able to do it. That's damn funny - if it isnt' you...too bad she couldnt' sue her folks. That's child abuse.

WR, good point... there are a few little girls in the USA with the middle name of Auburn. If they were born in Alabama, well, then you know. :) Otherwise, just a color.

But I once worked with a graduate of Auburn that named his daughter Catherine Auburn, and everyone just groaned when they heard...

The kiw name debacle is not unusual. I honestly believe that the earliest example of chavs was the proto genus. Chavus Antipodeas was first witnessed by this blogger in 88. Track pants barely containing arses the size of VW beetles with the doors open, snot nosed kids having ash dropped on them.. All the symptoms without Stella Artois. Lots of christain names with a z in them

That's made my day already...