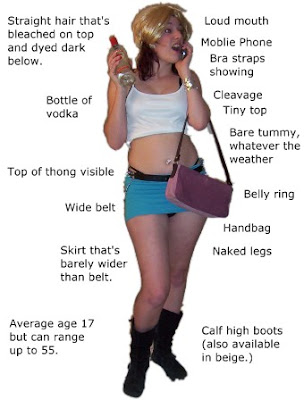 Lots of serious stuff in the news of late, so naturally something not very serious. No less distinguished a body than the Fabian Society wants the word 'chav' banned. The use of the word "chav" should be banned by the media and individuals with left-of-centre politics because it betrays a "deep and revealing level of class hatred' they pronounce.

For overseas readers, the nearest US equivalent to this peculiarly English word - now passed from slang into the mainstream - would be 'trailer trash'. The origins of the word are a matter for debate but the most accepted theory is that is derives from the Romany word 'chavi', which simply means child. The characteristics of chavdom are low socio-economic class, appalling dress sense and a tendency to criminality. Female chavs are sometimes described as 'pramface' - a refererence to their precocious reproductive habits.

Is there a serious point here? Ermmmmm.....

Social contempt is hardly new. the term 'oik', now only used ironically, was the equivalent to chav for previous generations. Snobbery is a deeply unattractive trait and those with wealth, power and position sneering at those with none of these is an unedifying sight. Getting political for a moment, the Labour Party has long ago abandoned its working class roots and the white working class has in return a sense of - well - abandonment. Those not wholly alienated from the political process (understandably - what's in it for them?) are easy prey for the likes of the BNP, who have cleverly tapped into this sense of alienation and abandonment. The problem is hugely bigger than smartass remarks at middle class dinner parties.

Does banning chav from the public discourse help? I don't think so. I'm reflexively against banning things - there's far too much of that sort of thing about. Maybe the Fabian Society would be better occupied applying its mind to more serious issues of social fracture and alienation.
Posted by white rabbit at 09:03

Great words, chav and pramface. Of course I've never heard of them, but I get the idea. Trailer trash and white trash, although quite familiar, I would never use serious conversation.

Those are some great words. I'd never heard them previously, but now I'll have to add them to my repertoire of available terms.

I remember looking up "chav" a couple of years ago and the wiki page had a different etymology. It said that it was short for "Chatham" (?) which was pronounced by some of the locals as "Chav-um" and a lot of these burberry-clad kids were first spotted there. Now I can't find any reference to that.

Either way, it's just a word. Banning the word won't make them go away. What a stupid idea!

No-one uses the word chav anymore. Pramface, possibly, but even then it's a bit of a stretch.

The Fabian Society may as well try and ban the word 'raggamuffin'. The principle would be sound but this is entirely mistargeted.

Greetings to all! A couple of comments:

Earl - Yup - that's the alternative theory and having been to Chatham, I can well believe it. Someone once said that if Kent is the Garden of England, then Chatham is the compost heap. 'Nuff said.

Garlicsmack - welcome to my humble blog. I think you will find that chav is still in widespread use. I did a quick Vox Pop at my place of work as to whether people used the word chav. Results:

Now looking back... I think I should have gone with the beige boots... ;-)

I feel like I understand the British just a little bit better now. We are overrun with Chavs in our neck of the woods.

Tut! Nothing so improper! the answer is in my posting of the 6th March

Dear WB, Thanks a lot for that link to March 6th, which was a little while before I discovered your great blog. I've been around the block a few times, you might say, and I've never heard "a bit of the white rabbit" used like the NYT did in that article. The connection with your blogname made me suddenly think I'd missed something along the way.
I like your story much better.

The way you've described your Labour Party abandoning its' roots and leaving the white working class without a place to turn sounds all too familiar. Our Democratic Party long ago dedicated itself to being the anti-white-male party, spreading as much class warfare as possible, while our Republican Party can't seem to figure out that it is precisely because of the white male vote that they ever won any elections in recent history. They're attacking us, too. So our upcoming election promises to be more about tossing them all out than about putting anyone in.

Chavs, bogans, and trailer trash. All the world over there seems to be a certain group of white people who like to go through life drunk, poorly dressed, and either having sex in the backseat of a car or sitting home watching racing on TV.

Steve - they have sex while watching racing on TV???

Look chavs/neds whatever you call them there the scum underclass that causes most if not all of the crime anti social behavior teenage pregnancy etc etc etc, There brought up in slum areas by uneducated unemployed parents and do not know any different.....Why? because the government pays lazy CHAVS to sit on there arse all day doing nothing?? People labeling them chavs/neds are stating facts, if they dont like what they are....change, Its typical for the likes of''Tom Hampson, editorial director of the Fabian Society'' to say its wrong well i bet they dont have to live amongst them day in day out, the word Chav is no different than the word thug its simply a statement! And Tom Hampson your trying to cover the problem hows about you take your issue up with the government after all they created them!!