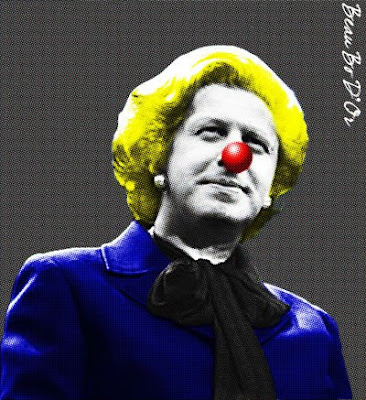 Today, for overseas readers and the terminally inattentive, is the day of the London Mayoral elections and I am off to vote very shortly, albeit with little enthusiasm. The mayoral vote is on the alternative vote system so i have two votes, a first and a second preference. I will give my first preference to the Green candidate (I somewhat warm to her as she does un-Green things like jumping into taxis and smoking - not simultaneously) and my second preference to Ken Livingstone. Now Ken has less than covered himself in glory - he is plainly an egotist and nothing remotely resembling a team player. He is a living monument to the limits of 80s style municipal Labour politics. Identity politics plus (funded) special interest groups is a toxic mix and the whiff of the pork barrel is distinctly discernible. His support for the Metropolitan Police over the De Menenzes shooting was an appalling cop out (as it were). He has undoubtedly improved public transport - a big plus - but that's about it. Plus I had sworn to myself some years ago never to vote Labour again while Blair lives and breathes and the preppy little war criminal seems still in rude health - as well as robust bank balance. Apparently the last Prime Minister to die poor was Asquith, rather a long time ago, however Blair is the apex of an unprecedented financial feeding frenzy by retired politicians but I digress.


So why am I going to give Ken my second preference? Short answer: to stop Boris Johnson (the Conservative candidate). There are bloody limits and this Tory twerp exceeds them by a million miles. Upper class twits can be amusing - well perhaps only on the pages of P.G. Wodehouse and the cricket commentaries of Henry Blofeld (whom God preserve - I've promised myself to blog on him soon) - but Boris is considerably less amusing than he thinks. I don't buy the bumbling buffoon routine one bit. The guy is intelligent enough and some of his reported views and attitudes odious. So off to vote I go...


Hat Tip as always to the wonderful Beau Bo D'Or for Johnson as Thatcher as clown.

In some ways, you Brits have politics that are totally befuddling to Americans. The candidates seem over complex and too numerous with more plot twists than a primetime American soap opera. But on the other hand, at least most British appear to be engaged in their politcal mess. Here in the States, we have to rely on sound bites and never ending gossip / commentary for idiotic talking heads. In the end, we get to chose between Black and White.....there is no gray.

I had much to say but it would have detracted from a friendship that I had built up and no amount of politics is worth such.

WR l love you to bits.

Very interesting, Andrew. While we're on the subject of politics, I've been meaning to ask you about your perception of the presidential candidates here in the U.S. There is much excitement now in my home state of Indiana, as we will be holding a primary election next Tuesday. Both Hillary Clinton and Barack Obama have been here all week. Have you received much coverage regarding the American campaigns?

You absolute darling. :-) If there was a Ministry of Clowns, Boris would have fitted in quite nicely there at some stage.

Boris won and the circus will go on...
should tbe good for a few laughs at least!

First and second preference is a great idea! I would like that here in the USA for smaller elections like mayoral.

I really wish we had a variety of VIABLE parties, rather than the system we have.

Bullwinkle villains are named Boris. Not mayors of London.

So what will happen now? Will Boris cock things up and loose the Tories the next general election? Will he pander to unthinking prejudice (like 'obliterate Iran'/'US 'gas' prices are too high' Hilary Clinton) in an attempt to put himself on the road to achieving his ambition of being Prime Minister - I have a feeling that would be the last straw for the Scots.

The former Auburn standout is among the 37 players on CFL offseason rosters from Alabama high schools and colleges.Most of those players aren't like Adams. (It took a little extra time, he said, because some of the staffers at Lowe's had seen him on TV, and wanted to offer kudos and support.)Here's what Spinks had to say about his experiences on "The Voice," as he moves into a phase of the competition known as the battle rounds.Q: Why made you decide to try out for "The Voice" You competed on "American Idol" in the past, correctA: I had been on "Idol," several years ago, and to be perfectly honest, that wasn't a great experience for me.

Later, for dessert, they had brownies with strawberries and hot fudge sauce.Wearing her halter style, pale blue dress, Julia and her "dates," James and Nicolas, who were both wearing New Air Jordan Shoes tuxedoes (they live in Mobile, after Jordan Shoes For Sale all), posed for photos along their white picket fence.

"Then we'll burn them or maybe blast them with a hose. Let all band here together, let suck it up a bit and do what best for our community. At some point during the COVID 19 lockdown, those of us with kids have likely spent time with the music of native Angeleno Randy Newman..