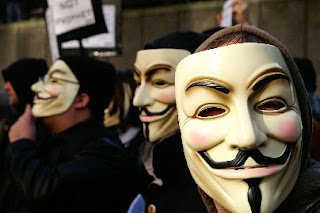 A hat tip is due to Jailhouse Lawyer for drawing attention to this story from the Torygraph. It seems that the limits of protest become ever more - um - limited.
I quote...
'A teenage boy is facing a possible criminal prosecution for holding a sign describing the Church of Scientology as a "cult", police said on Tuesday. The boy, who is described only as a minor, was taking part in a demonstration outside the church's central London headquarters on May 10 when City of London Police officers ordered him to remove the placard.
It read: "Scientology is not a religion, it is a dangerous cult."
When he refused, he was issued with a form of summons for an alleged breach of public order. Police plan to pass a file to the Crown Prosecution Service to decide whether charges can be brought.
Chief Supt Rob Bastable said: "City of London Police upholds the right to demonstrate lawfully, but we have to balance that with the right of all sections of community not to be alarmed, harassed or distressed as a result of other people's behaviour." '
Yeah right...
Hopefully the CPS will return the file with anatomically explicit instructions as to where to put it.
I've been here before, this has echoes of the Tibet Olympic torch protests. Why should people be banned from expressing a view because some arse may get offended. Not being offended is not a human right. How about a moratorium on being offended?
By the way, the pic is of an anti-Scientology protest group called - erm - Anonymous.
Posted by white rabbit at 11:24

Would the same thing have happened if the boy held a sign that said "The Church of England is not a religion, it is a dangerous cult?"

Because the members and followers of the CoE aren't a bunch of litigious assholes like those in the CoS. They might be offended, sure, but press charges? No way.

The more I read/hear about these thugs, the more I despise them.

I think scientology is more of a sect, than religion...

Earl - the CofE would simply look momentarily pained and move on..

You can't fight them... their modus operandi is to just doggedly fight and fight and fight through the courts, internet and other media until their enemies and critics are just exhausted or broke (or both). They take on EVERY SINGLE NEGATIVE THING said about them in the media, even just stray opinions. EVERY NEGATIVE REMARK, ANYWHERE.

Finally, the end result is that no one says anything negative about them out of fear of the expensive consequences... or simply don't want the considerable aggravation.

Yikes. Guess I'd better stopping saying that myself... or not.