Every picture tells a story... 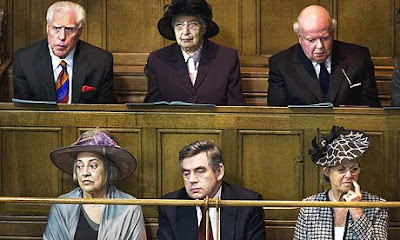 Sometimes the camera can be not so much cruel as vicious. The image is of a certain Gordon Brown at the General Assembly of the Church of Scotland. It probably seemed a good idea to show up at the time. He would be guaranteed a better reception than Thatcher when she attended the same body in the 1980s and unburdened herself of one of her simplistic rants. The Thatcher rant went down like a lead balloon. No doubt whatever it was that Brown said did go down better but the problem is that no-one has a clue what he said. It wasn't the story. The story is the photo. Unfortunately for Brown the photo really says everything about him - glum, dour, essentially totally stuffed. I am wholly out of sympathy with the New Labour project and the sight of the poor booby twisting in the wind has its comical side. Contrary to the usual bletherings, I would be amazed to find him in post in the run-up to the next election. The guy is box office poison and when Labour MPs get an idea of the scale of the potential carnage, the political equivalent of the bottle of whisky and revolver in the library will be on offer. Okay - more than on offer - they will insist. Expect Miliband to be the beneficiary. I don't believe it will save them. The punters aren't listening any more. But it may constitute damage limitation.
The other equally glum faces in the photo complement Brown perfectly. The woman on the left front row's face is an - um - picture. I do hope the one on the right is not about to pick her nose! Do they make the women wear those hats? I suspect the answer is 'yes'. Looking at the state of the hats, this would seem to be a practice that ought to be discontinued pronto.
On a completely different topic, it looks as if the rabbit has secured a ticket for the League 1 playoff final and is off to Wem-ber-lee! Blog no doubt to follow...
On a completely different different topic. After the blog on Texas Death row, I have become interested in the case of Roy Pippin. It's too early for any conclusions but researches continue. Again watch this space..
Posted by white rabbit at 09:35

Which one is Gordon Brown? It looks like everyone in the picture died years ago.

I like the boy-girl-boy seating arrangement that they seem to have going on.

How very grade school of them. Oh, and Brown is the dead-looking man on the bottom row. Next to the nose-picker. He has experience with that particular habit.

I am amazed at how 'frumpy' older British Politicans look....as though they live in a musty smelling dusty attic and are only brought out in the sunlight to scream at each other.

lotus - forget the 'as though' bit - they really are.

If that pic does not put you off your dinner, nothing will!!!!

MiMi - happily I had already eaten - though I think the Blair pic is more of a barf hazard...

yeah i know, dear, i posted under the wrong pic actually, dizzy me

Is it me, or is the lady in the checkered jacket just about to start picking her nose?!