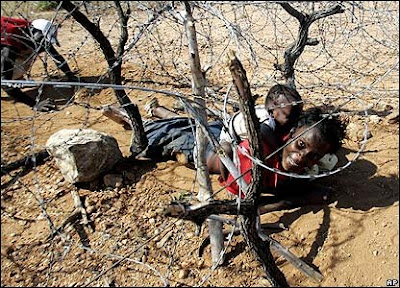 The picture shows a Zimbabwean mother and child voting with their feet, or in the immediate instance stomach, by crawling into South Africa through the barbed wire barrier.
Mugabe's antics put me in mind of a poem by Bertold Brecht ('The Solution')...
After the uprising of the 17th June
The Secretary of the Writers Union
Had leaflets distributed in the Stalinallee
Stating that the people
Had forfeited the confidence of the government
And could win it back only
By redoubled efforts.
Would it not be easier
In that case for the government
To dissolve the people
And elect another?
There ya go, Bob, Dissolve the people and elect another. Problem solved!
Posted by white rabbit at 20:06

bert is best!
'Ah, what times are these when to speak about trees is almost a crime when it implies silence about so much injustice.'

mark ravenhill was described as 'sub-brecht' the other day. high praise.

What's the story of the photograph - do we know if the photographer, once satisfied, helped them past the razor wire? Can't help feeling a certain repugnance at the idea of someone stood snapping away when a baby's inches away from being shredded by razor wire; we wouldn't have even half the clue we have without their terrible pauses, I know.

I was thinking the same thing as Julie.

Help the baby out instead of snapping a pic!

I hope the photographer helped bigtime too - point taken. Image was from BBC and it is a disturbing one.

I pity those poor 3rd world dictators. Life has to be getting so tough for them. In the old days, you could seal off the Border, slaughter thousands, keep the public in a constant state of fear, and then build your palace and party with your security forces for for decades. Now, with the damn internet, and Wi-Fi, digital cameras and 24 hours news channels you can't get away with anything anymore. The good-old-days are definitely over. China is finding that out more and more.

lotus - and others - the justification for this kind of image is that it shines a light on what is otherwise hidden. Quite what is too disturbing to put up is a moot point and opinions will vary. As a criminal lawyer, I'm not sure I am the best person to judge as I get shocking images of violent crime. I used to find them very difficult to deal with but now accept that they are a part of what I do. When I did the blog on Deir Yassin last week, I found a lot of images of victims of the massacre but decided not to put any of them up and - after a little hesitation as to appropriateness - put up the film clip instead.

Why do pple always assume the worst?

The photo journalist showed a disturbing event, a "snapshot" in time.It is his job to use his camera to point the finger, and without him standing there snapping away none of us would have had a clue.

As I believe in the good of pple (and that includes journos) I like to think that he or his crew pulled those pple out.Actually, call me naive but there was never a doubt in my mind.

i know a few journos and i wonder... nice that mimi has faith though. mimi and george michael.

it's the vietnamese girl running down the road again and the timeless debate.
the jewish principle that in saving one person you save the world. a great principle - could it not also be reversed to state that in attempting to save the world (or at least people in this plight in general) you save the individual?

You must not lose faith in humanity. Humanity is an ocean; if a few drops of the ocean are dirty, the ocean does not become dirty.

seems there is at least three us then ;)

It is a truly powerful and disturbing image. I'm sure that is why it was taken. I'm thankful that it was, in order to shed light on the situation taking place. One can only hope that, after taking the picture, the photographer helped to protect the child.

I'd like to be able, like Mimi, to think the best of people, but don't find it easy. So let's at least give praise where it's due: to the Durban dockers who refused to unload the ship full of people-suppressing arms bound for Mugabe and to the South African High judge who banned its overland transport. Once upon a time British trade unionists were like that. Now they seem content to fund warmongering New Labour.

Anonymous - just blogged on this. Sorry, didn't notice your comment until later but agree totally.

Mimi - some of us were actually hoping for the best rather than assuming the worst. :-)

I think some of the impact caused by such powerful images has to come from the questions raised round how they came to be taken. It was the outrage and discomfit caused to viewers by the famous Kim Phuc photo which signalled the beginning of the end for the Vietnam war, after all - people just can't take too much reality and will always be moved to outrage more by what they see than what they hear.

Good to see some British trades unionist sticking up for others. My congratulations to the Grangemouth workers for fighting
for the pension rights of future employees against an exploitative international corporation that could easily afford to make a proper contribution to pension funds.