return of the rabbit... 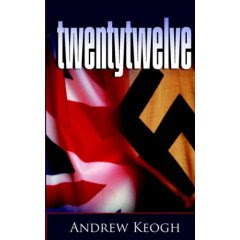 The rabbit has just returned from a sojourn in Stafford to the greater glory of criminal defence, hence recent blogsilence. When I set up the blog I tartily invited readers to buy my novel twentytwelve in support of my desperate attempt to get its amazon.co.uk rating below half a million. The tarty invitation fell on deaf ears and the rating crept up to over 800,000. Imagine my surprise when peeking at my amazon rating a little while ago. It was - um - 77,937! Okay - no great shakes but a huge improvement on something over 800,000. There is an interesting point about amazon sales ratings. You might think they are based on - er - sales, but apparently not. the editor at my publishers tells me that there are two things that amazon will never explain: how many copies they sell and what their sales ratings are actually based on. In the higher ratings area they can career up and down wildly but when the ratings plunge to high six figures they seem to stick and move very little. Perhaps someone out there in blogworld knows more than me.

A free advert: commuting to Stafford is prohibitively expensive as well as time consuming so I stayed up there for the case. I went up on Sunday night. I have worked out that there are very good hotel deals to be had on a Sunday night. The reason is that on Sunday night the weekend breakers have gone and the business travellers have yet to arrive and so the hotels have rooms on their hands which they let out at bargain prices. So on Sunday night I stayed at The Swan, a seriously flash hotel in the centre of Stafford and just round the corner to the court at a knock-down price. The Swan was too expensive for weekdays so I booked into a B&B for Monday and Tuesday. It was - um - a B&B. They didn't do food so directed me down to the nearest pub which did 'good food and good ale'.

The nearest pub was called the Spittal Brook Inn. Let me praise it.

Inside the signage - to use the stupid word - was no less bizarre. My personal favourite was in one corner...

BULLSHIT CORNER - PLEASE CLEAN UP YOUR BULLSHIT UP AFTER YOURSELF

The food was really standard pub fare but the array of beers was a wonder to behold - including an organic real ale. The Spittal Brook Inn is just a lovely old fashioned pub with friendly locals. Folk night Tuesday night (compete with bizarre but amiable collection of folk musicians), Quiz night Wednesday night. They have rooms too. I gave up on the B&B and stayed there and the rooms were clean, bright and modern. The landlord is completely eccentric but has made his own stamp on the place. In an age of standardised pub chains, to find a guy who is running a pub in his own way and running it well is a breath of fresh air. Kudos to the guy. Oh and we came third in the pub quiz... 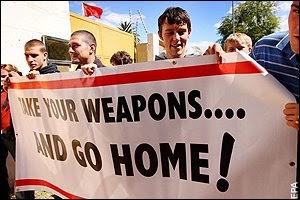 On a completely different subject, I am delighted to note that the An Yue Jiang, the Chinese ship with a cargo of murder weapons - sorry arms - for Mugabe has slunk off back to China after being refused permission to dock by a series of African countries. Some troll from the Chinese foreign ministry was quoted as saying 'it is pointless to politicise this issue'. Oh yeah? Let's politicise it bigtime!

i'm with the spokesperson; if we start politicising errr politics then where will it all end?

The ratings change was all my doing - I picked up my copy yesterday when I got paid. As soon as I finish "The Sheep Look Up," it's next on the block.

That pub sounds like my kinda joint. Something we are sorely lacking her in the states.

downtown guy, it is a great book , hope you enjoy it!

Rabbit, haven't they got a magnificent outhouse? ;)

SW - all very bizarre - 'don't mind us, we're just tooling up a repulsive dictatorship to massacre its population. That's not political - why we do the same sort of thing ourselves!' :D

Downtown Guy - don't think so as this was the UK amazon - which has a different ratings system. It is true though, small sales can cause very big shifts in amazon ratings. If your elderly aunt decides to buy all four of your cousins a copy of your opus on amazon you will (briefly) go stellar!

Earl - somehow I think you would have loved the Spittal Brook Inn - it dates from the 1830s and there is a road bridge over the rail line next to it which was built in the C19 when someone drunkenly blundered out of the pub and onto the adjoining railway line. Splat!

Mimi - you smooth talker you! The outhouses are outside lavatories to the old cottages next to the pub as you well know!