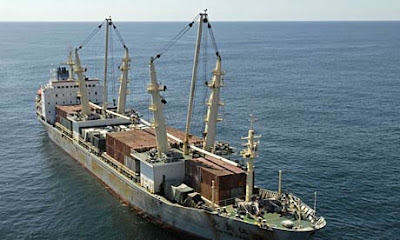 The tragedy goes on. The picture is of the An Yue Jang - for those of you who have really not been paying attention - a Chinese ship believed to be carrying 77 tonnes of small arms, including more than 3m rounds of ammunition, AK47 assault rifles, mortars and rocket-propelled grenades destined for - where else? - Zimbabwe. Now why would Mugabe want such a consignment at this present time one can only ask? And why would the Chinese oblige? The answer to the latter question is that China is run by about as low a bunch of low life as can be imagined. A clue to the answer to the first question (okay - the answer is in the realm of the bleeding obvious but bear with me) can be found in recent history. Some years ago a large consignment of machetes was delivered from China to Rwanda. What then followed was the Rwandan genocide - the murder weapon of choice in the genocide being (surprise, surprise) the machete.

Out of this horrendous scenario there beams two beacons of light. The South African dockers who refused to unload the ship and the South African High Court, which ruled that the cargo could not be transported to Zimbabwe.

Huge respect to the dockers, the judges and lawyers involved and the Congress of South African Trades Unionists. They answer some of the questions raised in comments on my previous blog on the subject and contrast wonderfully with the snivelling attitude of the 'see no evil' South African government. Let's hope the ship doesn't get to unload anywhere and sinks or something...
Posted by white rabbit at 15:14

Lets HEAR it for the Common Man that's what I say! ( * thunderous round of applause*) I just wish there was a way in law that the ship could be arrested and prevented from delivering it's heinous cargo ANYWHERE in Africa.....

Good thing that China has the Olympics this summer to spread a little "world unity" vibe.

Profiting on war and suffering. How do they think they are? Americans?

According to the lessons that George Bush and Dick Cheney have taught us, this just means one thing.

It's great that South African dockers were able to take such action.
Had anyone here tried to halt a cargo going to one of the noxious regimes we support (and
with whom certain former leaders split bribe money) the police would have been down at the docks and you fellows in the legal profession would be busy with writs and injuctions or defending union members in the other kind of dock. Sad fact of the legislative and industrial inheritance from Tory
days which New Labour
would not abandon.