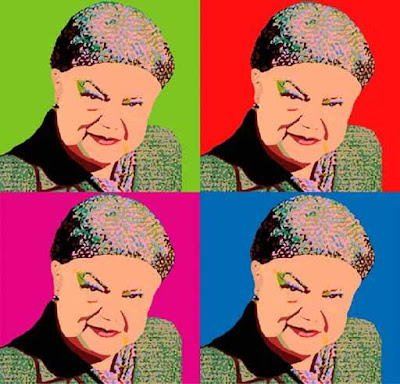 Explanations for overseas readers required straight away! The ridiculous Harriet (Hattie) Harman is the Deputy Leader of the Labour Party, having been elected as such in an appalling lapse of taste by the three remaining members of the Labour Party. She is also something or the other in the Government but I forget what.
Hattie is also the Member of Parliament for Peckham - a part of south-east London not known for its - um - peaceful nature and has incurred much derision for going walkies in her constituency wearing a stab jacket. Our heroine was in the company of a large number of burly police officers at the time, thus presumably reducing the risk of being stabbed to the minimal - even in Peckham. Quite what Hattie thought she was up to remains obscure. A Peckham resident was quoted as saying 'we only ever see her when there's an election on or she's doing a PR stunt'. One can only tut at such cynicism. Apparently Hattie has explained her fashion mistake by saying - among other things - that it was like wearing a hairnet, which put me in mind of Ena Sharples, the hairnetted harridan of the early years of Coronation Street. Feast your eyes at the Warholisation of Ena. It's better than thinking about Hattie..
Posted by white rabbit at 19:13

Politics are so much more colorful across the pond....here in the states we get Hillary Clinton....:(

Was Hattie voted into office?

lotus07 - welcome to my humble blog - Hillary's campaign is watchable in the sense that a car crash is watchable - or have I mis-spoken?

Renegade - Hattie was elected Deputy Leader of the Labour Party by a bizarre pantomime horse of an electoral college - one third of the votes come from each of (a) party members - a diminishing band! (b) Labour Members of Parliament and of the European Parliament (b) members of affiliated Teade Unions - it is complex and somewhat arbitrary and results are expressed in percentage as some votes are worth more than others!

She is also elected to the House of Commons by the good people of Peckham just as a congressman/woman would be in the US but with the distinction that - as there is not the same seperation of powers here - she is a member of the exective and a Cabinet Minister as well as of the legislature. End of lecture...

Poor old Peckaham, having to put up with such a ridiculous woman - no wonder its in such a bloody state.
In a past life, Peckham was part of my patch; it was seriously rough even then ( and we're talking ten years ago) but I always found the people living there to be, on the whole - even if they had a string of form longer than a High Court Judges Sleeve - generous and welcoming, always ready with a cup of tea or a can of cold coke on a hot summers day.These usually people among the poorest in the community.
The wealthy of Peckham, on the other hand, slowly moving in because it was a cheap and, for a time, trendy place to be - were a completely different kettle of fish; they woudln't so much as offer a paper cup of water when I visited; God knows, some of them wouldn't even let me sit down on their nice posh sofas.
Shows how well Hats knows her constituents, don't it?!

In her case, a car crash....only if there is a fatality.

Minx - I lived briefly in Peckham many years ago. Hated the place...

Lotus - I take it you are not a fan ;) I add you to bloglist

No, its not everyone's cup of tea; I was newly qualified and perhaps a bit naive, but I was staggered by the grinding poverty of the place, though even when called out at 3 in the morning, I cant say I ever felt endagered by anyone or anything; I certainly didnt need an alarm, security accompaniment or a flak jacket. But then, times change and I suppose I do look back through rose coloured specs.
However, I still maintain that one of the worst things EVER to happen to P was H......

I miss Ena Sharples and Minnie Caldwell - they wouldn't have had any time for stab proof vests. I named one of my chickens Harriet, but it was not meant as a tribute to Ms Harman. I think she's coming across as a bit of a wimp especially if she still won't walk down the street at night, not even as the proud owner of a stab proof vest. Some people don't have the luxury of choice regarding whether they're willing to walk down the street alone at night. Eh, chicken!