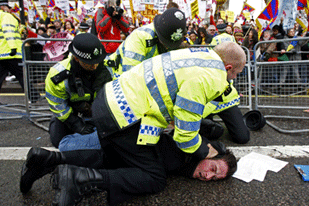 All pretence of normality went out of the window when, bizarrely, a Chinese goon squad of 'security officers' appeared in admittedly rather fetching powder blue tracksuits surrounding the Olympic torch, they themselves being encircled by a ring of police. Who arranged and authorised the goon squad remains obscure but ought not to.

Apparently, the tradition of Olympic torch bearing dates back to the 1936 Berlin Olympics (why am I not surprised?) but things have not been going well from the outset of the torch bearing exercise in Greece (trouble), via London (plenty more trouble) and Paris today (even more trouble). The gargoyles are plainly desperate for an appearance of normality and a public relations triumph. They are getting abnormality and huge amounts of grief. Good!

One little detail struck me particularly. It relates to the policing (by over 2,000 police officers) of the protests. Since when did assisting in presenting the delusion of normality to keep the gargoyles happy become a legitimate policing objective? The little detail? Well police were evidently doing the rounds of protestors confiscating Tibetan flags and demanding the removal of T-shirts.

By what lawful authority was this done? One protestor was ordered to take off a T-shirt with 'stop the killings', 'no torch in Tibet' and 'Talk to the Dalai Lama'. Not unreasonably, he asked why. The police were unable to provide a reason for this order. There is no reason and no authority for such a demand. Putting on my lawyer hat and having considered and rejected all the possibilities that could given even a spurious reason for this order I can only conclude that there is no lawful authority for this order and it constitutes an abuse of office. What is more the abuse of office is motivated by a wish to collude with an odious dictatorship in maintaining a pretence that there is no dissent when there is plenty of dissent.

Police follow orders. They are a heirarchical command organisation. Who gave them these orders? And why? As the cliche goes, I think we should be told.
Posted by white rabbit at 18:53

1980s - police request pickets to remove badges bearing slogans supporting miners.
police raid coach firm taking protesters to cruise missile base in cambridgeshire (comically, the wrong coach firm, as it was one with a similar name that was transporting undesirables to wreck western civilisation by walking down a public right of way at 2am...).
police arrest any car with 4 men going up the A1 as they were clearly flying pickets (well, vicars actually in one celebrated case).
i'm sure the politicisation of the police didn't begin there and i'm damned if it will end there.
god help us - all we have is the judiciary between us and stalinism... and they probably think the young whippersnapper is still in charge.

This is just going to get more ugly as we get closer to the Olympics. I am going to tune into the opening ceremony ONLY to either see the worlds most empty Olympic Stadium or the biggest riot of all time. Bound to be interesting. I think the Chinese have bitten off more than they can chew.

(I can't speak for the UK, but here in the States, the police have the authority to 'address' any form of expression that could threaten the peace or disrupt order, ... which means loose the t-shirt buddy, or go to jail.)

Protesters are already climbing the Golden Gate bridge in San Fran, I heard today on the radio.

I immediately pictured King Kong scaling the Empire State Building for some reason.

simply - sure, this is neither unique nor new. It's part of a general trend whereby the powers that be hate dissent.

lotus - yes, we gather that similar things happen in the states - the unfortunate Andrew Meyer who got tasered for losing his temper and shouting the odds got big coverage here.

Earl - San Francisco should be very lively although the radio says the IOC is thinking of abandoning torch exercise, although the Chinese would hate that...