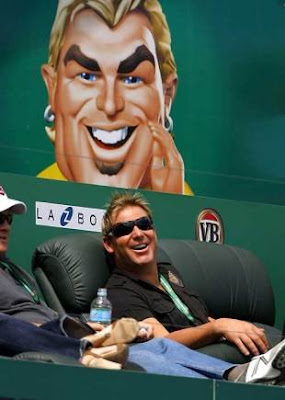 My feelings on Australian cricket are the same as those of any other English person of goodwill, namely a bitter and twisted loathing. The sight of the gruesome McGrath gave me attacks of Tourettes, the chipmunk faced Ponting has me giving the TV screen reflexive v-signs. Don’t get me wrong - I like Australia and Australians very much – but it’s a sporting thing and it goes deep. So why do I feel a sense of regret at the just announced retirement from first class cricket of Shane Warne?

A part, and only a part of the answer is that Shane was good – wonderfully good – at what he did. He took the previously lost art of leg spin bowling to new heights. He did things with a cricket ball no one else could have dreamed of. The expression on umpire Dickie Bird’s face after Mike Gatting was comprehensively twatted by ‘ball of the century’ was a delight. Bird had seen it all or at least he thought he had. The open mouthed expression, obviously thinking ‘whaaaaaaaaaaaat?’ says it all. Shane made it to one of the Wisden ‘Five Cricketers of the Century’ in 2000 and I ain’t arguing.
The other part of the answer is that Shane was outrageous – that would be seriously outrageous – from his peroxide blond hair to his sponsored Nike boots. As well as rewriting the record books, Shane variously managed a charge of bringing the game into disrepute (running his mouth off), a ban for testing positive for a banned substance, being accused of sending ‘lewd and harassing’ text messages, and photographs of him in a state of partial undress with various models. Not surprisingly, his long-suffering wife eventually had enough. The recent announcement that the child-man was intending to become a professional poker player surprised no-one. He also plans to devote time to a hair transplant business...
Two Barmy Army songs would seem the kind of valediction he would probably enjoy (for readers from non-cricketing countries, the Barmy Army follow the England cricket team around the world, they are note for their passion, their repertoire of songs and - erm - their capacity to drink beer) The tune is My old man's a dustman - a tune also notoriously adopted for the tasteful Posh Spice is a slapper…
Shane Warne is an Aussie
He wears a baggy cap
He's got a Nike earing
He looks an Aussie prat
He's got his little flipper
He's got his box of tricks
But when he bowls to Freddie
He gets knocked for six.
Erm, not always...
Shane Warne is a druggie
He should be in rehab
He took his mummy’s little pill
To try and lose the flab
He took it to lose weight
From all the pies and beer
But when the ICC found out
He got banned for a year
We'll miss you - you fat bastard. It’s been a lot of fun….
Posted by white rabbit at 09:12

You've received glorious accolades over at my blog.

Come on over and see.

As a (sorta) half kiwi/half pom, I must admit that I've never found any reason whatsoever to enjoy watching Aussie sporting dominance. But still, I must admit, Shane's added a bit of colour to proceedings. It's been much more fun watching him take wickets than say (ooh ahhh) Glenn McGrath, who is just a gangly fuckwit, who can dish it out with the lip, but sure as fuck can't take it. What a cock that guy always was.

So yeah, Shane was fun to watch. And an interesting factoid about Shane's 'ball of the century' to Mike Gatting back in '93, is that I was the Antipodean 'ring in' to our team back at the same time, and I took a wicket with my very first ball on English soil the same way that Shane did... and on the very same day!

Only difference is, Shane's ball pitched outside leg stump on a perfect length and spun viciously to hit the top of off-stump... my ball, on the other hand, was a classic 'loosener' with made my shoulder crack like a shotgun blast and hit the pitch about a third of the way down and was just about to bounce a second time before the batsman (somehow, don't ask me how) managed to spoon the thing straight up in the hands of mid-off...

So me and Shane are 'connected' in some weird way... (although I never tried to blame my drug habit on my mother).

Cheezy - I've bowled that ball too except my shoulder didn't crack and the ball did bounce twice before the by then thoroughly confused batsman spooned it to mid-off...

Obviously the old 'surprise long hop' can be an effective ball... if used sparingly :)

nice to hear you bowlers on about the old 'shit takes wickets' rule - as a keeper i like to keep my bowlers' feet on the ground.

shane is and always will be a god. and i'm a pom ffs!
not only is he one of the greatest bowlers ever;
there are all the tales about him and no doubt they are true - the southampton nurse being the saddest; but having met him (only once alas) can i say:
he is a gent;
he behaved like a professional and had no attitude whatsoever about his status compared to us mere mortals;
he ain't fat - i hugged him and it's like hugging a brick wall! (don't worry - this is no new sex scandal, we were filming an advert)
as we were shooting, the director used these ill-judged words:
'errr shane, you know when you throw it, could you throw it like this please' - demonstrates how he would like him to bowl for the camera.
awestruck silence from those of us who knew anything about cricket...
shane doesn't blink.
'yes mate of course - just show me again' and then he 'threw it' exactly as required!
the day i kept to shane warne...i can't wait to have grandchildren so they can say 'what you on about yer daft old git?'.

like i said - a god. and a beautifully flawed one.

simply wondered - okay, Shane isn't fat - it's just I never got that close to him! I have been sick over an England opening batsman's wife's lap though. My excuse is that I was about four at the time and she had fed me an entire bag of sweets!

If Republicans want the power of a majority, they need to make the case to voters to give it to them. In a Thursday announcement discussing measures to limit the spread of the outbreak all residents isolated in their rooms, meal carts disinfected between each use home management also noted that people in the community had donated donate personal protective gear to staff, hung bird feeders on the lawn and arranged for clergy to read scripture and lead prayers over the internal intercom system.

In most cases, these transactions New Air Jordan Shoes will be conducted by our third party partners and vendors. Please continue to stay positive as we all push through this together. Cheap Nike Air Force 1 The diagnoses Coach Outlet Clearance come as some of the airline flight attendants, Air Force 1 In Store who spoke withcomplain of shortages of protective equipment like gloves, or disinfecting wipes.

"We have no idea of the potential loss of revenue, but we are already losing daily revenue of course," she said. The material on this site may not be reproduced, distributed, transmitted, cached or otherwise used, MK Outlet except with the prior written permission of Advance Local..

The Jazz and Oklahoma City Thunder were Yeezy Shoes For Sale quarantined in OKC's Chesapeake Bay Arena after their game was postponed.It all made for one of strangest days in modern American sports.With basketball games in Nashville scheduled less than three hours after the NCAA's announcement of Jordan Shoes For Sale caution, the SEC made the decision to allow fans into Bridgestone Arena for Wednesday night's two games.

"Flawless," Beyonc video. Au premier chef, conserver les institutions. But Cher is bawdy, she fun, she cool, she lived a life, she got experience, she humble. Cheap Yeezy Shoes Sale European countries report 20 30 per cent increases in calls to domestic violence helplines, from Catalonia to Cyprus..